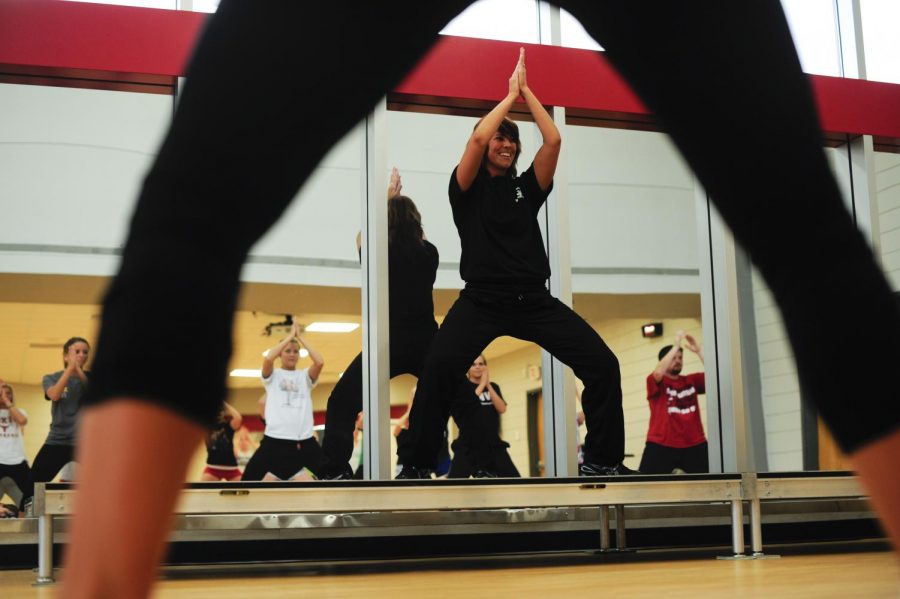 Instructor Jacquelyn Cline, leads an afternoon Zumba class in the Preston Center. "I think Zumba’s for everybody," Cline said. "The creator made it to where everybody can do it, and no matter if you want to or not or think you can or can’t, I mean, if you just start doing it. It’s contagious."

Hips in a line move quickly from side to side to the beat of the music.

Left foot out, right foot out.

Throw in a couple of fist pumps and arm waves, and you haven’t even covered half of the movements in a Zumba class.

Zumba is a mixture of cardiovascular exercise, Latin dance and aerobics, and is taught at Preston Center.

The class is fast-paced, but has some slower-beat songs in the mix to add some variety.

Bowling Green resident Jacquelyn Cline, 22, teaches the class on Tuesdays and Thursdays, and said she fell in love with Zumba immediately after trying it.

“You don’t feel like you’re working out because you’re having so much fun, and that’s the best way to work out,” Cline said.

“So I found something that was entertaining, and didn’t feel like I was just exercising.”

Now, Ramsey said he attends the Zumba classes at Preston Center all five days a week that the classes are offered.

“It’s bonding time for us, and just a great way for us to get to know each other,” she said.

Ramsey said he likes that the Zumba classes are upbeat.

“Both instructors make it really fun,” Ramsey said. “They’re always smiling, they’re always upbeat, they’re always getting everybody involved in it, it’s really hard just to drag through it, even though sometimes they work you pretty hard.”

Even sometimes being one of the only, if not the only, males in the class doesn’t deter Ramsey from attending.