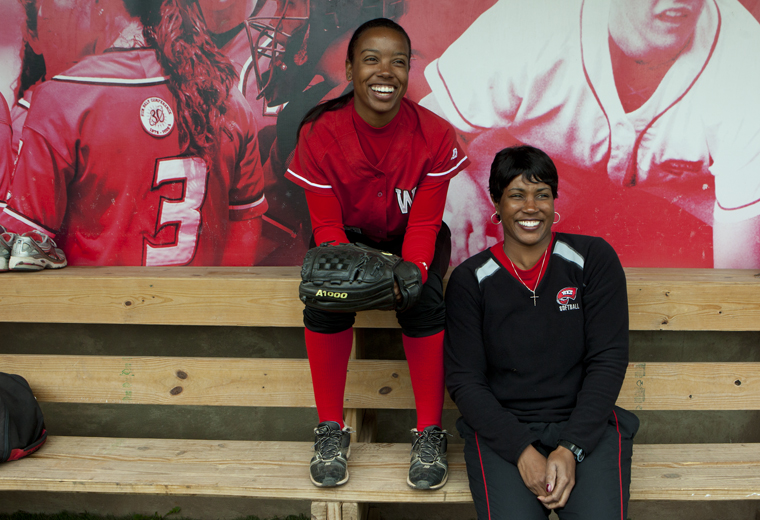 After some last-minute instruction and a round of nurturing praises, she concludes the day’s work as the team breaks the huddle with a cheer of “Western!”

This season marks Perry’s fourth at WKU (18-15, 1-5 Sun Belt Conference) and her first year with a team solely comprised of her own recruits.

But senior Brittney Perry’s relationship with the head coach runs a bit deeper than her four years on the Hill — since birth, actually.

The two are sisters.

Brittney Perry was raised in the same home as her sister, but when she was 5 years old, Tyra Perry left for Louisiana State University to play softball about an hour and a half away in Baton Rouge, La.

“I was the little sister that used to wait for her to come home from school because she always brought me a T-shirt or candy, and I thought that was the coolest thing in the world,” Brittney Perry said. “I was always asking, ‘When’s Tyra coming home?’”

Tyra Perry said she played the usual role of the older sibling, enjoying visits from her baby sister as Brittney Perry attended all her games at LSU and even many practices.

Brittney Perry joked about the “influence” those trips created growing up, attributing her left-handed stance and slap-hitting style to her older sister’s fear of sibling rivalry.

“I was on my right side in high school, and she moved me to my left, so maybe she thought I was going to be better than her,” Brittney said with a laugh. “I think it had more to do with me being fast, though.”

Although the sisters are 13 years apart, the bond off the field has only grown deeper with time for the two Zachary, La., natives.

“I think because she is more of an adult, we have become closer,” Tyra Perry said. “I’m going to really miss her when she graduates because it is nice to have family when the rest of our family lives so far away.”

So as the team disperses from the field Monday — some of the players planning to meet in Red Zone and others seeking to get away from the constant softball — Brittney Perry’s situation stands alone.

She relaxes from softball by spending time with her older sister, who lives nearby in Bowling Green.

“When you want to get away from ball and school, it’s nice to have my sister there to say, ‘Hey! You want to go to the movies or the mall?’” Brittney said. “It clears my head.”

Senior Elizabeth Ferrell said the relationship differs on the field so much that off-field interaction is a little strange to witness.

“It’s pretty cool actually,” she said. “It’s not weird until you see Brittney on the phone and talking to her like a sister instead of her coach. She tells you she’s talking to her sister, and you’re like, ‘Your sister? What?’”

The team does take advantage of the connection’s benefits though, using Brittney Perry’s expertise on the various subtleties of their head coach to help ease tension.

“It helps with communication,” Ferrell said. “She can tell us what she’s going to do without asking the coach a lot of questions.”

They will play a doubleheader Saturday at 1 p.m. and 3 p.m. and the finale at noon Sunday.