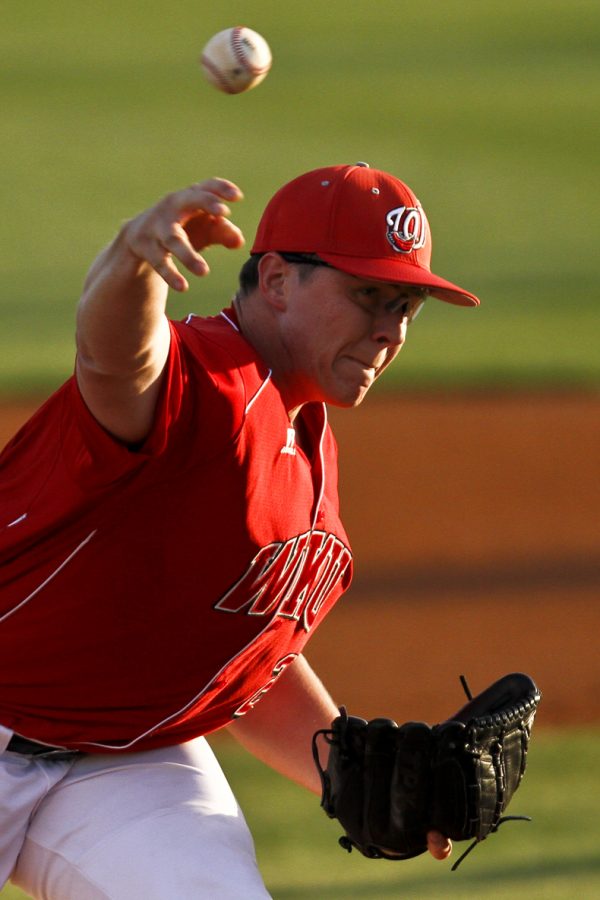 WKU Head Coach Chris Finwood told his team before its two midweek games that he wanted to see them score 15 runs both nights.

After a 17-6 win over Austin Peay Tuesday night, the Toppers were able to push across just three runs Wednesday against Murray State.

But thanks to strong pitching and timely defense, that was all WKU (22-12) needed in a 3-2 home victory at Nick Denes Field.

“I told the guys that you’re going to have to win some games like that during the year, midweeks especially,” Finwood said. “You’re not only going to get 17 runs. We swung the bats great last night, tonight we didn’t swing them as good, but we pitched good enough.”

Junior right-hander Rye Davis, traditionally a reliever for the Toppers, started for WKU.

He gave up four hits and three walks over five innings but surrendered just one run.

After coming into the game with an 8.10 ERA, Davis said that he decided that his “season was going to start tonight.”

“The year hasn’t been going the way I had planned for it to go,” Davis said. “I decided I was going to step up and give our team the best chance to win, and I think I did that tonight.”

WKU manufactured the game’s first run in the first inning after junior left fielder Jared Andreoli drew a walk, stole second and then was driven home on an RBI single from senior Matt Rice.

Rice normally catches, but Wednesday he served as designated hitter for the fourth time this year and went 2-for-3 with the first-inning RBI.

The Toppers pushed their lead to 2-0 in the third inning when junior center fielder Kes Carter extended his hitting streak to 14 consecutive games with a single through the left side, scoring junior second baseman Ivan Hartle.

The ‘Breds cut the deficit back to one in the top of the fourth when catcher Jacob Rhodes took a Davis offering out over the Leachman Auto radar gun display in right field for his second home run of the season.

Murray then tied the game at two in the sixth when right fielder Zach Noonan hit an RBI double to left field off Topper reliever G.J. Strauss.

But WKU was able to put together just enough of a rally in the seventh.

Freshman first baseman Justin Hageman followed with a single through the left side, giving the Toppers runners at first and second with no outs.

Hartle moved Huck and pinch runner Jordan Cessna to second and third with a perfect sacrifice bunt, his team-leading 12th sacrifice hit of the year.

After Andreoli hit a weak groundout to first that kept the runners on second and third, Murray starter Luke Shuemaker issued an intentional walk to Rice.

That set up a lefty vs. lefty situation between Shuemaker and Carter with the bases loaded and two outs.

But Shuemaker missed the strike zone on four straight pitches, surrendering the go-ahead and eventual game-winning walk to Carter.

Murray threatened in the eighth with runners on the corners and two outs.

But junior right-hander Phil Wetherell produced an inning-ending chopper to junior third baseman Casey Dykes on his first pitch out of the bullpen.

Wetherell then needed the defense to help him in the ninth, with the bases full of ‘Breds, just one out, and cleanup hitter Rhodes coming to bat.

Rhodes hit a high chopper to Hartle, who timed the bounce with a good backhand and flipped to junior shortstop Logan Robbins for the force at second.

Robbins then threw over to first to nip Rhodes and finish the game-ending double play.

“I saw that it was a chopper off the bat, and I knew I had to come get it so that we’d have enough time to turn the double play,” Hartle said. “I just flipped it over to Logan who made a nice throw over to first and got the out.”

Strauss earned the win to move his season and career record to 2-0.

Shuemaker took the loss, while Wetherell earned his fourth save of the year.

The Red Wolves stand at ninth in league standings with a 4-8 mark, while WKU is in second place with an 8-4 Sun Belt record.

Finwood confirmed after the game that sophomore left-hander Tanner Perkins, who pitched the Saturday game last weekend, will be on the mound for the series opener Friday at 6 p.m.

Finwood also said that senior designated hitter Chris Bullard, who sat out Wednesday’s game with a hand bruise he suffered against APSU, will be available this weekend.

“In baseball you can never take anybody lightly, and we found ways to get a couple of wins,” Hartle said. “That’s big going into this weekend to get some momentum and take care of business.”