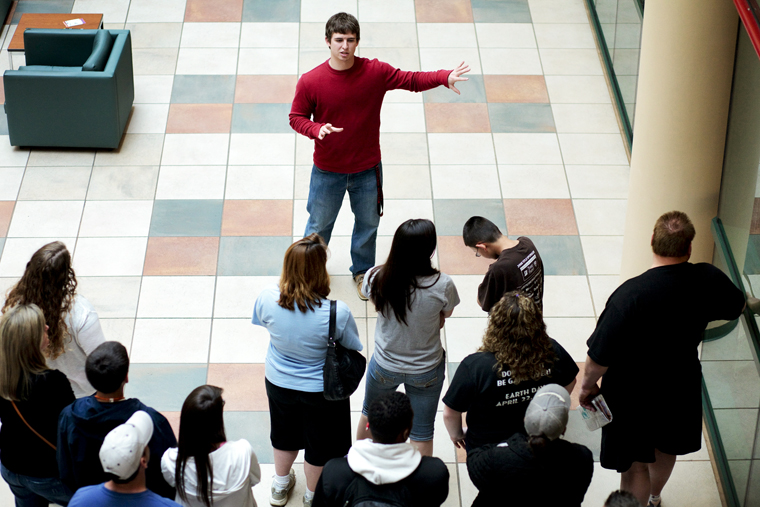 Louisville junior Brian Campbell leads a group of prospective students and their parents through Mass Media and Technology Hall during a campus tour.

When prospective students consider attending WKU, many sign up to take a tour of campus to help them make their final decision of whether WKU is the right university for them.

Since a large portion of the tour is a bus tour, there is a 28-person limit, he said.

Yuan said there are important points on campus that the tour guides show the students.

“The three major areas we always want to incorporate … on official tours are a residence hall, DUC and Preston Health and Activities Center,” he said.

The Office of Admissions doesn’t only give tours, though, he said.

“Our whole office is recruitment-based,” he said. “We host open house events, focus events, preview days, and those are just some of the things we do.”

Yuan also said that his office sends people to recruit students at college fairs all over Kentucky and on a national level.

The Office of Admissions also sends mail to students who have taken a campus tour as a follow-up, he said.

Campbell said attendance on the tours varies, but there are usually 15 to 20 people, including parents, in a tour group.

He said there are a lot of things on campus he likes to cover in his tours.

“One of the things I try to emphasize is campus involvement,” Campbell said. “One of the best things a freshman can do is get involved. They’ll be a lot more successful.”

He also likes to highlight the different benefits of campus life.

“We’re lucky to have a lot of things right here on campus,” he said.

Campbell said his favorite points are the Preston Center, the IT department, Health Services, the two convenience stores on campus and the food options on campus.

“The food on campus is great. There’s all kinds of different options, so I try to emphasize that,” he said.

vorite points to help them adjust to college life.

“I never feel like I have to tell people things that aren’t true just because it’s a sales pitch or something like that,” he said. “I really do love it here.”

Campbell was considering a different school before he came to WKU, but a tour of that campus changed his mind.

“I considered going to UK. I went, and it was just such a big campus,” he said. “I didn’t find my place there, and then I came here and have loved it ever since. I haven’t looked back.”

He said his love for WKU is what motivates him to be a tour guide.

“I want to try to help people as much as possible getting to know WKU because it’s been great for me,” he said.

Jacob Mangan, a high school junior at Walton-Verona, took a tour with Campbell and said the campus was what made him consider attending WKU after being on campus for the girls’ state basketball championship.

“The campus plays a big role in deciding where I go to college,” Mangan said. I don’t want to go to a school that I don’t like its campus.”

Alexis Bellini, a high school senior from Hendersonville, Tenn., was on the same tour as Mangan.

She said the campus plays a “really big” role in her college decision.

“I like how the dorms are set up, and the campus is really pretty,” she said.

“As the old saying goes, ‘You never get a second chance at a first impression,'” she said. “If you haven’t made a decision before visiting a campus, it can make a difference.”

WKU has a full-time grounds crew, who mow and clean the grounds, as well as perform maintenance on many of the trees on campus, Siewers said.

A garden crew maintains the many seasonal flowerbeds around campus, she said.

She said there is a seasonal schedule of things to be done on campus. The major times of year for campus beautification are the beginning of the fall semester, Homecoming and graduation.