Notes: QBs step up for Taggart in last week of spring practice 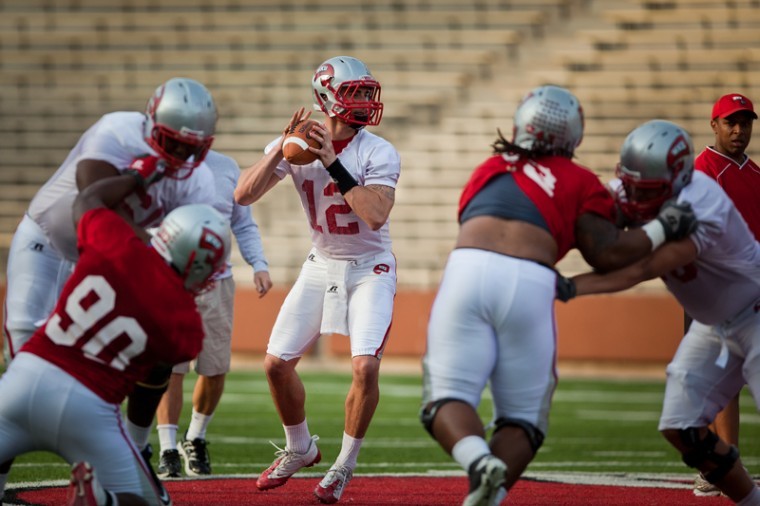 After a disappointing display from his offense in last Saturday’s scrimmage, Head Coach Willie Taggart was looking for a rebound this week.

And he got just that.

With just days left until the annual spring game on Saturday, the Toppers’ offense finally showed up for Taggart at Tuesday’s practice.

“They came out here with a purpose,” Taggart said. “Saturday, I didn’t think they did. They competed and they executed today. Defense has been beating on them all spring, and we really got on them today on the blitz.”

In Saturday’s scrimmage, Taggart was frustrated with the performance of his quarterbacks, junior Kawaun Jakes and redshirt freshman Brandon Doughty, because of multiple incomplete passes thrown.

But at Tuesday’s practice, it was a different story.

It was a turnaround that Taggart said has to happen after a bad day at practice.

“Even when things aren’t going right, he’s got to be that guy with the smile on his face, letting them know it is going to be okay.”

Jakes, who started every game at quarterback for WKU in 2010, has been competing with Doughty for the position this spring.

Taggart has said many times that the level of leadership the quarterbacks display is what will ultimately win the position.

And Jakes said he is taking it to heart.

“If you have a bad play, you have to play the next play.”

Feix Field has been cleaned of the vandalism that occurred last Thursday night.

WKU discovered last Friday morning that the letters “LBMF” had been drawn in white spray paint on the scoreboard end of the field.

The program has since filed a report with WKU police.

Also, the Toppers will just practice once more on Thursday before the spring game. The spring game starts at 5 p.m. Saturday at Houchens-Smith Stadium.