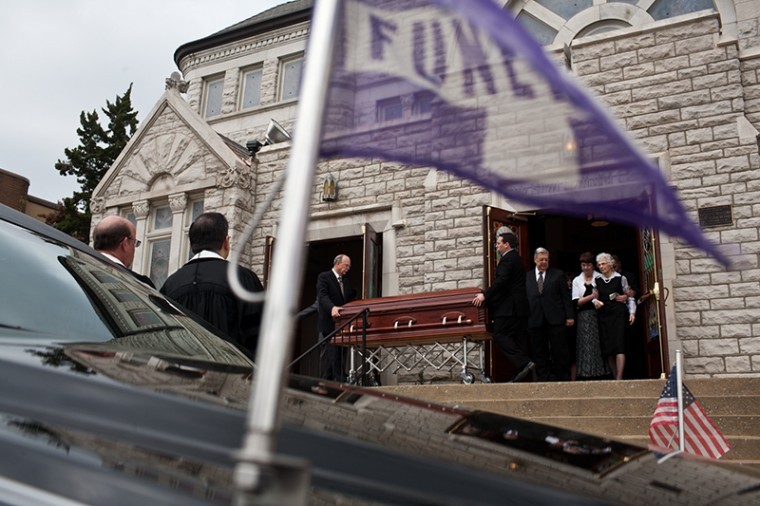 Harriet Downing, the late Dero Downing's wife, leaves the church behind her husband's casket before he is taken to his final resting place at the Fairview Cemetery on Friday, April 08, 2011.

When Dero Downing came to WKU as a freshman in the fall of 1939, he began a practice of sending his parents a steady stream of hand-written letters.

By 1944, when Downing joined the Navy amidst World War II, his letter-writing had become a habit, and he wrote to his wife, Harriet Downing, every day in which he was allowed.

Once Downing returned from the war in 1945, he never stopped writing letters. Downing wrote to his family, his friends, his colleagues, someone he thought could use a word of encouragement, or even someone he thought deserved a note of praise.

His impact on peoples’ lives was evident, as more than 600 people gathered at State Street United Methodist Church on Friday to celebrate the life of WKU’s fourth president, who passed away on Monday at 89.

When Reverend Rick Bard asked those in attendance who had ever received a letter from Downing of any sort, many in attendance raised their hands.

“His letters were a labor of love,” Bard said during Friday’s service. “The content of his writings expressed that love through encouragement, appreciation, congratulations, and guidance.”

Bard’s message, entitled “One More Letter,” conveyed the notion that Downing had one last letter to write — one that’s meant for everyone.

“He’s left us with the most important letter he could ever write — an honorable and noble legacy,” Bard said.

But the letters were just one way that Downing touched the lives of so many that he came across daily.

Those who knew him best remembered his humility and kindness.

His daughter, Elizabeth Downing, told a story about a time when she was pregnant with her daughter Goodman. It was late in the winter months and she needed a winter coat, but she didn’t like the idea of buying a new coat just for the few remaining weeks of winter.

“So daddy offered me his coat,” she said. “He bought it in 1947. It was his most prized possession. That winter, that coat wrapped me and my baby girl with love and warmth from my daddy.”

Fourteen years later, she said she still wears that coat.

“Each of his children, grandchildren, nieces or nephews, brothers or sisters has his or her own version of that coat — of daddy’s love and gracefulness,” Elizabeth Downing said. “We know that grace will always be with us.”

Bard recited a Bible passage from the book of Ephesians in which Paul says not to be selfish, but to be humble and think of others as better than yourself.

He acknowledged that’s not easy to do, but said Downing did it with ease, and with a smile on his face.

Downing became well-known during his time as an administrator for patrolling the WKU campus and cleaning up any litter he found along his way. After he was done with that, he could be seen stopping students in buildings or on their way to class just to get to know them.

Even until recently, Downing hadn’t changed his ways.

“We could be up in the College Heights Foundation building outside of (his son) Alex’s office, and he’d stop someone right there,” Bard said. “He’d ask them where they were from or what their major was. He just wanted to get to know people.”

Bard said people tried to tell Downing that in this day and age, students might find that encroaching on their lives.

“It changed nothing. He kept going,” he said, laughing.

Downing’s grandson, Donald Smith, said moments like that stuck out more than anything to him and Downing’s 12 other grandchildren.

“He taught us so much about character, integrity, relationships, perseverance, humility, kindness and love,” Smith said. “But we learned all of that through much more than his words. We learned it through his actions.”

Even if Downing didn’t agree with something someone was doing, he’d take a gentle approach to it. President Gary Ransdell remembered one particular case earlier in his tenure as president where such an instance occurred.

“He didn’t like the Rally Alleys too much at the baseball field,” Ransdell said.

Rally Alleys, which run down the first- and third-base lines at Nick Denes Field, sell concessions — including alcoholic beverages.

“I told him it’s a different time and a different era, and I trusted our young people,” Ransdell said. “I told them if you treat the students as adults, most of the time they’ll act like adults. He had to nod his agreement to that.

“But seldom in 13 and a half years did he really disagree with something. It was always a compliment.”

What Ransdell said he appreciated most about Downing once he became WKU’s president in 1997 was that Downing kept a proper distance.

Downing was an example of someone who practiced what they preached. That’s the legacy that Bard said he’ll ultimately leave behind.

In his closing remarks, Bard reminded those in attendance to always remember the way in which Downing lived his life and how he treated others.

“Write a letter, sing a song, praise God, and lift someone up,” he said. “Make their day brighter and their load lighter. Live with passion and a vision that will outlast you. That is what our friend, our mentor, our life coach Dero Downing did.”