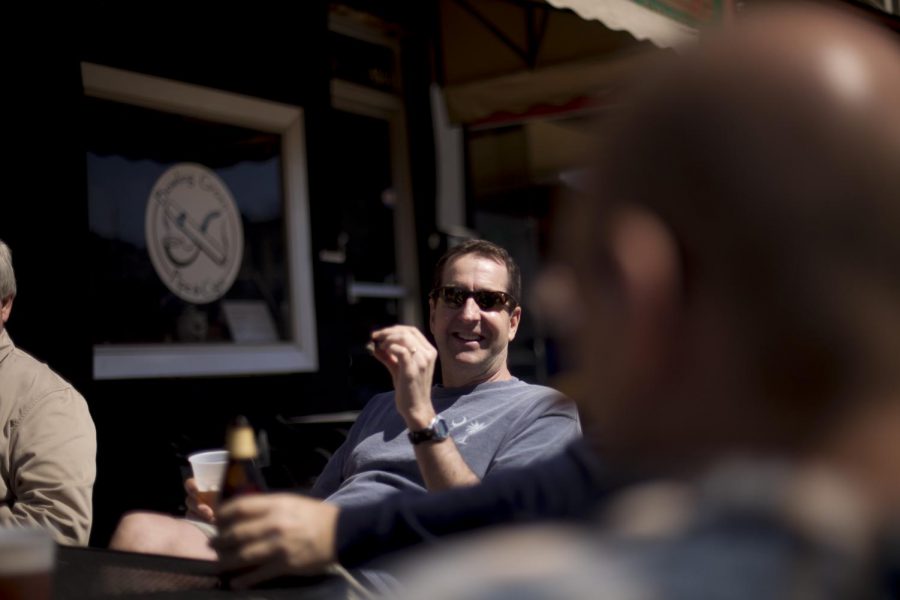 Bill Hall of Bowling Green talks with a group of men outside Bowling Green Pipe and Cigar on Saturday. Customers sat outside smoking cigars and drinking beer in the warm weather.

Chris Abend always smokes a brand of cigar before he and co-owner Andrew Cole stock it at their shop downtown.

“It’s one of those things where if I can’t find a redeeming quality in it, then how am I going to sell it to somebody?” said Abend, who co-owns Bowling Green Pipe and Cigar on 434 East Main Street. “How am I going to describe a flavor profile that I don’t enjoy or that I don’t think someone else will enjoy?”

Abend is originally from eastern Tennessee, but he moved to Bowling Green to attend WKU. Though his major was in hospitality management, he never graduated and instead opted to open his own business.

The store space has been around for 33 years, according to Abend. It’s been a jewelry store and a hardware store before becoming a tobacco store.

The store had many owners before Abend and Cole acquired the business in November 2008 when they were both 23.

“After coming here for school, I became a customer of the store,” he said. “Like anything as a young kid, you start thinking, ‘Well if I ran the zoo, the things I would do.'”

He said they would stay up until 4 a.m. some nights, discussing the store and putting things on paper.

Abend said they didn’t want someone else to buy the place and let it die.

Since the store had already sold tobacco, they had a client base to work with from the start.

In the end, Abend and Cole decided to take the risk and go for it.

Louisville junior John Bradford is a patron of the store. He started smoking cigars when he turned 18 and enjoys one about once or twice a month.

He said the shop has a great atmosphere.

“It’s nice to go in there and relax for a couple of hours,” he said. “It helps me take my mind off school and things like that.”

Abend started smoking cigars when he was working in retail and at restaurants as a way to keep himself from smoking cigarettes.

“Really, the only way you get a break in either of those industries is if you smoke,” he said. “So in an effort to keep myself from smoking cigarettes, I just took longer small cigar or pipe breaks.”

Hopkinsville senior Andrew Roeder also shops at Bowling Green Pipe and Cigar from time to time. He got into cigars after a friend’s father let him sample new brands.

“You get all the relaxing enjoyment of smoking while getting to feel like you’re a World War II general,” he said.

Abend said there’s more to the selection process than whether they like the cigars. He prefers the company make their own cigars. That way there’s a tradition behind them and not just a marketing campaign.

“With anything, the story and tradition is what really draws people to a product,” he said.

Abend said he’s very pleased with business these days. They continue to offer new products and keep a steady rotation of what they already carry.

“We’re constantly trending up, so I’m not concerned about the future really,” he said. “I’m happy to be along for the ride.”