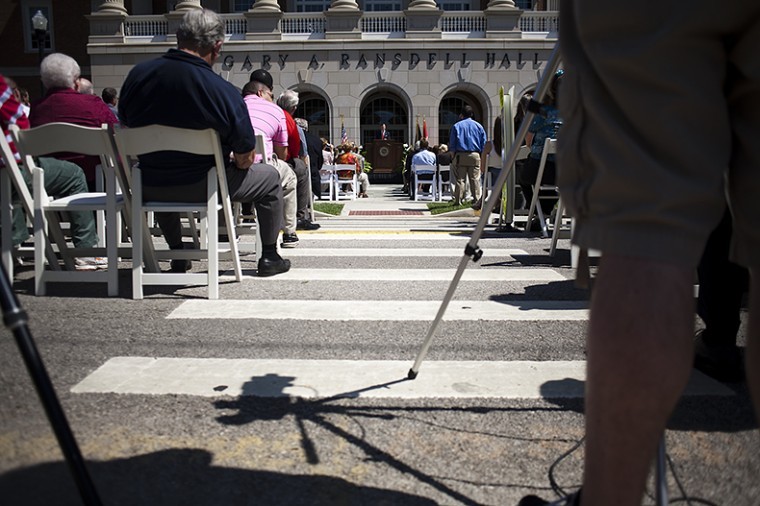 WKU president Gary Ransdell thanks everyone for dedicating the new Gary Ransdell Hall across from the Mass Media and Techology Hall on Friday, April 29, 2011. JERRY ENGLEHART JR./HERALD

Bob King, president of the Kentucky Council on Postsecondary Education, said he first saw the new Ransdell Hall after speaking at Friday’s Board of Regents meeting.

King was walking out of the Mass Media and Technology Hall with President Gary Ransdell, for which the new College of Education building was dedicated Friday.

“It was really the first time I had the chance to look at the front of the building and see his name up there,” King said. “I looked at him and said, ‘My God, you’re still alive.'”

King and others who spoke had Friday’s dedication had little trouble poking fun with Ransdell while at the same time lauding his many accomplishments at WKU.

“I’ve had the great privilege of working with each of our … presidents, and there is none that is more fun than this guy Ransdell over here,” King said.

David Williams, president of the Kentucky Senate, said Ransdell is special because he’s from Kentucky, attended WKU and returned to the university — not as a stepping stone, but “as a place to build a life and a legacy.”

“Now, we come here today not to bury Dr. Gary Ransdell, but to praise him,” Williams quipped, earning laughter from the large crowd that assembled outside Ransdell Hall on Friday.

Ransdell Hall is home to the College of Education and Behavioral Sciences. The building, named by the Board of Regents last October, has been open for classes since January.

Signage was placed on the building Thursday morning leading up to Friday’s dedication, which was attended by more than 100 members of the WKU community.

Sam Evans, dean of the College of Education and Behavior Sciences, distinguished some in attendance Friday by asking them to stand. But those who were recognized blended in with a crowd that was standing-room only despite seating that spilled out onto a closed Normal Drive.

As Ransdell took the stand to speak, he simply said, “Wow.”

Members of WKU’s Board of Regents, which met for its second quarterly meeting on Friday morning, were in attendance along with numerous city and state representatives and Murray State University President Randy Dunn.

Ransdell’s 26-minute speech was one mostly spent thanking others, including WKU faculty, staff and students. He saved thanking his family, namely his wife, Julie, for last.

“No one has worked harder at my job than Julie,” Ransdell said. “She doesn’t like the term, but if there has ever been a lady, first or otherwise, at any institution, it’s Julie Ransdell.”

Evans described the dedication as a “momentous occasion” — not only because of who the building is named for, but for what it stands. WKU officials have submitted paperwork to have Ransdell Hall a LEED-certified, or environmentally friendly, building.

“We are extremely hopeful that we will will recognize not only the university but the community and state in the level that we achieve,” Evans said.

Representative Jody Richards took a moment Friday to reflect upon the time he spoke at Ransdell’s presidential inauguration in 1997.

“Little did we foresee then that President Ransdell would knock the top out of all of our expectations and pass our most expansive degree of hope,” Richards said.

Richards said that even through all the construction projects Ransdell has set in motion since then, what stands out is the Honors College, Gatton Academy, and soon to be three doctoral programs at WKU.

That, Richards said, is why it was appropriate to name the College of Education building after Ransdell, who has agreed to serve as WKU’s president through 2022.

“President Ransdell’s dream for WKU is so extensive and comprehensive that it’s dizzying,” Richards said. “But I mean that as the ultimate compliment.”