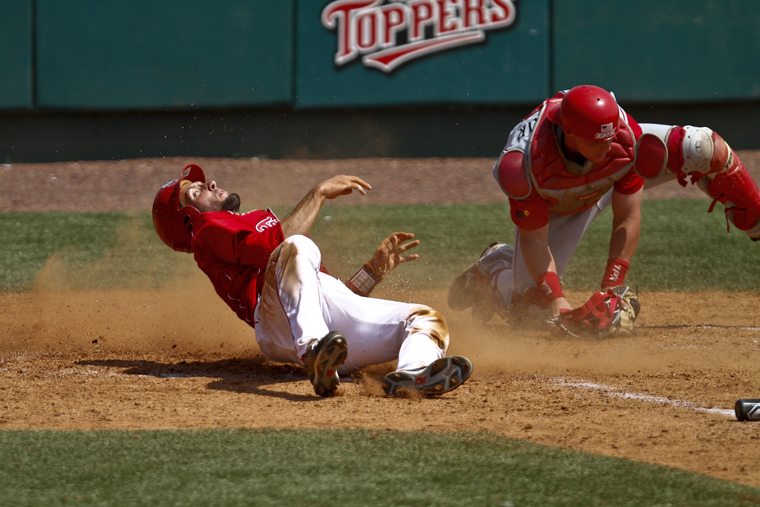 A lot was on the line for WKU when Louisiana-Lafayette came to Nick Denes Field over the weekend.

The Toppers went into Friday having lost three of their last four Sun Belt Conference games, and they were tied with the Ragin’ Cajuns for second place in the league standings.

But after winning two of the weekend’s three games, WKU now sits alone in second place, one game ahead of ULL and three games behind surprising league leader Troy.

Rice was also the hero Saturday, as his RBI single in the eighth inning broke a 1-1 deadlock and produced a 2-1 Topper win.

The Toppers had their best offensive output of the series Sunday with six runs on 10 hits.

But the WKU bullpen conceded six runs in the game’s last four innings, and the Ragin’ Cajuns were able to get an 8-6 win to fend off the series sweep.

Topper Head Coach Chris Finwood said that following the loss, he was still pleased with his team’s efforts for the weekend.

“Getting beat Sunday leaves a bad taste in your mouth,” Finwood said. “But they were fighting for their lives today just to win one, so you’ve got to give them the credit. Those were two really evenly matched clubs, and we were just happy to win the series.”

While Finwood was satisfied with the series result, Topper fans were also glad to see junior shortstop Logan Robbins back on the field.

Robbins had missed WKU’s last six games coming into the weekend while nursing a case of phlebitis in his left foot.

He didn’t record a hit Friday or Saturday but came back strong in the series finale, going 3-for-4 with an RBI, a run scored and three stolen bases.

Robbins, who is second on the team with a .382 batting average in Sun Belt play, said it felt nice to be back in the Topper lineup.

“I missed the guys like crazy last week,” he said. “Being away from them really hurt, so to be back out here was fun.”

The Toppers got Monday off before turning around to play at Austin Peay tonight and hosting Murray State Wednesday night.

Start times for both games are 6 p.m.

Melissa Anderson, assistant director of media relations, confirmed Monday that both today and Wednesday will be so-called “staff days,” with several pitchers splitting the workload in each game.

Sophomore pitcher Taylor Haydel will start tonight against the Governors. He is 3-2 with a 7.08 ERA over 15 appearances.

He and the other Topper pitchers will try to shut down the Austin Peay lineup for the second time this season, as WKU defeated the Governors 5-2 on March 22.

Robbins said his team will have plenty of momentum going into the week after winning the ULL series.

“Our goal is always to win the series,” Robbins said. “We went out there, and we did that. Our guys really played well this weekend, and I’m proud of the way we played.”