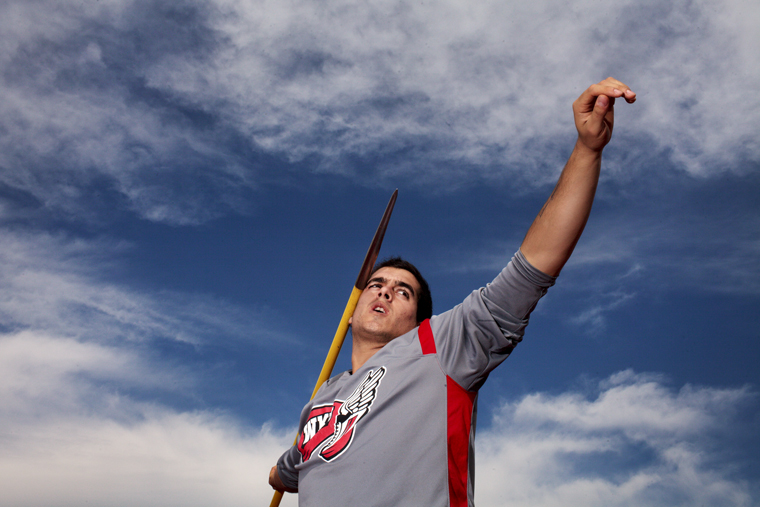 Ignacio Guerra prepares to throw a javelin at practice on Wednesday. Guerra set the NCAA-leading mark for the javelin throw in his first meet this semester, and he also competed for Chile in the 2008 Beijing Olympics.

Guerra arrived in January from his home country of Chile and has already made national waves in the javelin throw, setting the NCAA-leading mark in his first meet in the U.S.

But asking for “Ignacio” around the team might get you some confused looks. Guerra prefers to go by his nickname, “Nacho.”

“That was a nickname he brought with him from home,” Assistant Coach Jarrett Murphy said. “The first time our head coach talked to him he said, ‘Don’t call me Ignacio — I go by Nacho.’”

No matter what you call him, Guerra’s impact on the team can hardly be called into question. His throw of 258 feet, 2 inches in Florida during his first NCAA meet currently leads the nation.

The throw shattered WKU’s previous record by nearly 30 feet and broke Guerra’s own Chilean national record by six inches. Before arriving in America this year, he competed for Chile in the 2008 Beijing Olympics.

Guerra first started throwing the javelin in his hometown of Santiago, Chile, when he was 16 years old. He said the facilities in the city were a big reason he wanted to come to WKU.

“It was just hard to train in Santiago,” he said.

Guerra also said the amount of ways to train here is a big difference from what he was used to in Chile.

“There I could only work on one schedule,” he said. “Here you have all the tools you need.”

The facilities in Bowling Green might be what Guerra was looking for, but his training isn’t easy.  He said he typically trains for two hours a day, six days a week, and his regimen includes running, doing technical work, throwing a ball and other techniques.

“We don’t do a lot of hard throwing during practice,” Murphy said. “The javelin is really rough on the body, and competition tears you down quite a bit.”

“We want to have elite athletes at Western Kentucky, and he was elite,” Jenkins said. “You always want to have a kid of that caliber on your team.”

Murphy said WKU wasn’t the only team that was hoping to land Guerra this season.

“There were a lot of other schools that were recruiting him,” he said. “We were just lucky enough to land him.”

While Jenkins said he has been very impressed by Guerra’s work on the field, he said some of his best moments have come as a spectator, calling the junior an “outstanding teammate.”

“When he finished his event at Florida, where he exceeded his personal best, he immediately started cheering for the sprinters,” Jenkins said. “That’s a teammate.”

Guerra has one more year of eligibility remaining after this season, and he said he plans on returning to WKU to compete again next year.

“I want to stay here,” Guerra said. “I’m comfortable, and I have everything I need here.”