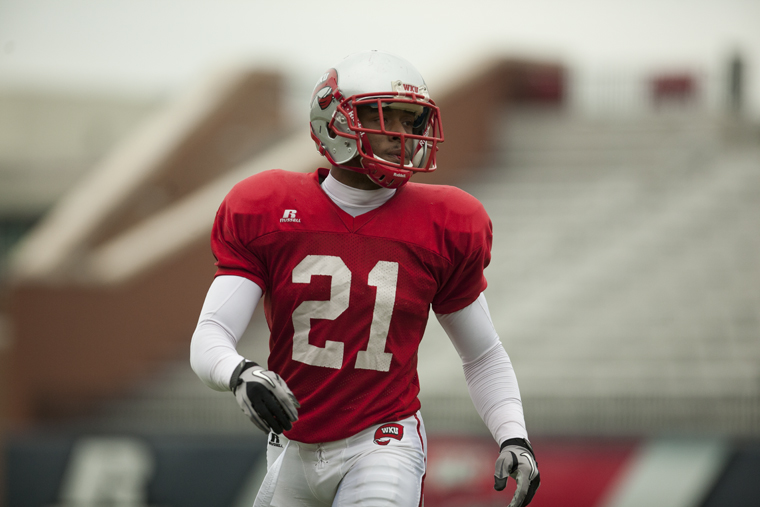 Sophomore defensive back Arius Wright practices at Houchens-Smith Stadium on Wednesday. Wright started at cornerback with then-freshman Tyree Robinson for the first time against South Florida last season, and the two went on to start a majority of WKU’s remaining games.

Trust is something sophomore cornerback Tyree Robinson said he knows a thing or two about.

It’s what he had in his teammates and his coach when he started for the first time, then only a freshman, in front of 40,276 fans at Raymond James Stadium for WKU’s game at South Florida on Sept. 25, 2010.

Robinson and Wright were both true freshmen corners at the time, while Young was a redshirt freshman safety.

“Every one of us trusts each other in the secondary now,” Robinson said Monday. “Everybody is going out and playing as a team. When we play as one, I feel like we can’t be stopped.

“If I trust you, I’m going to need you to trust me back. The trust is there 100 percent. I feel like I know what my guy is going to do next to me because he got my back, and I got his.”

Young notched six starts during the season and finished sixth on the team in tackles.

With a year of experience under their belts, both Robinson and Wright said the secondary is already close.

“We are young, but … we all came into this game together,” Wright said. “We played off each other last year. We all know how each other plays — that’s just me, him and all the rest of us making plays.

“He does something, I know what he’s thinking. I do something, he knows what I’m thinking. It feels like we are in each other’s heads.”

Because of that experience, new defensive backs coach Alonzo Hampton said coming to WKU has been an “easy transition” for him.

Hampton, who was previously the defensive coordinator at Arkansas-Pine Bluff, joined the Toppers in February after former defensive backs coach Clayton White left for Connecticut.

Taggart first met Hampton during an internship with the NFL’s Philadelphia Eagles in 2005.

Head Coach Willie Taggart said that future is starting to be realized already.

“(Last year) they were freshmen,” he said. “They didn’t know what college was like. They didn’t know about meetings, going to class, working out, getting up in the morning. All that stuff was new to them.

“Now they are getting adjusted to them where it’s like clockwork. The more they can get adjusted to it, the better we are going to be.”

As the Toppers conclude their second week of spring practice, Wright said he and the other players are simply trying to improve as much as they can.

“The attitude now is we are going to get it as a defense and as a team,” Wright said. “We aren’t letting up on nothing. We got their attention last year. Now, we are coming to take over.”