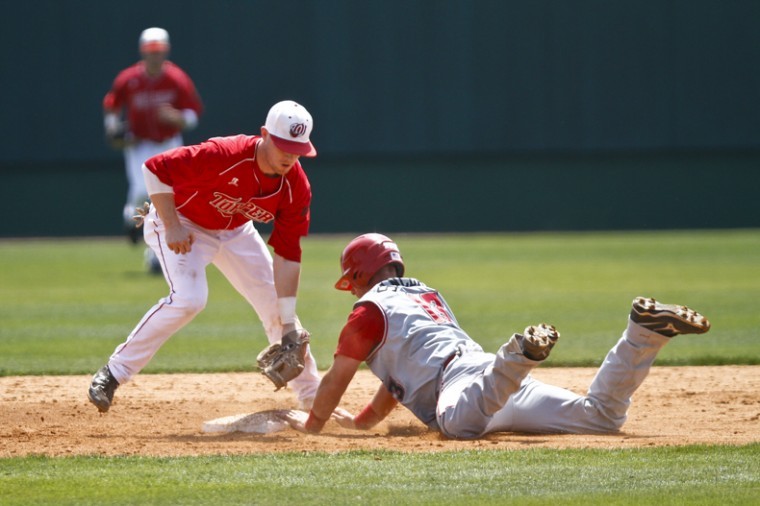 Bullpen troubles haunted WKU once again Sunday in an 8-6 loss to Louisiana-Lafayette.

The Toppers (20-12, 8-4 Sun Belt Conference) had a 3-2 lead heading into the sixth inning, when freshman reliever Brian Doering took over for senior starter Brian Edelen.

Doering was replaced by sophomore right-hander Taylor Haydel, who allowed Marvel to score the go-ahead run on a drag-bunt single from ULL catcher Chris Sinclair.

WKU came back with three runs in the bottom of the inning to retake the lead at 6-4.

But Haydel and junior reliever Rye Davis combined to issue five walks in the seventh inning, two of which came in bases-loaded situations, allowing the Cajuns to tie the game at six.

Davis then walked Sinclair to begin the ULL eighth before being pulled in favor of junior reliever Phil Wetherell.

Wetherell also allowed another run in the ninth, which made the final score 8-6.

His ERA rose to just 3.66, but the other three relievers all saw their season earned run averages eclipse the seven mark.

WKU Head Coach Chris Finwood said after the game that he was frustrated with the efforts of his bullpen, especially Davis.

Davis was a Preseason All-Sun Belt Conference team member but has lost his closer’s role while seeing his ERA climb to an unsightly 8.10.

“We just gave them way too many free baserunners,” Finwood. “I thought we were on the right track with Rye, but he went backwards today. We’ll keep working on it. He’s just being stubborn, and it’s the same old thing. If you always do what you always did you always get what you always got.

“He’s got to be willing to make some changes to get better, because right now he’d not very good.”

The poor relief performance wasted the Toppers’ best offensive day of the series.

Junior shortstop Logan Robbins led WKU with three hits in four at-bats and stole three bases. He also chipped in an RBI and scored a run.

“We’ve talked a lot about Matt, and he’s a special player,” Finwood said. “He’s just out there giving you everything he has every game, so I’m really proud of him.”

The 8-6 loss prevented the Toppers from getting their second sweep of the conference season, after a 5-1 win Friday and a 2-1 victory Saturday.

It also marked the third consecutive Sunday loss for WKU, which remains alone in second place in league standings.

But Finwood said he was pleased with a series victory over the reigning Sun Belt champs.

“Anytime you lose on Sunday it doesn’t leave a good taste in your mouth,” Finwood said. “We won the first two, and they were coming out fighting for their lives today, so you’ve got to give them credit.

“These were two evenly matched clubs, and we were happy to win the series.”

WKU will next play a road game Tuesday at 6 p.m. against Austin Peay.

The Toppers have already defeated the Governors once this season, 5-2 on March 22.