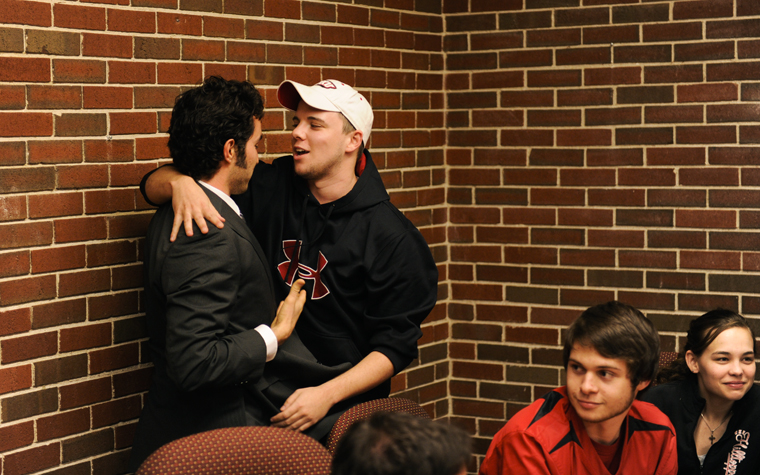 But as the announcement drew closer, he said nerves really began to hit.

Stephens beat out Diego Leal Ambriz, a senior from Monterrey, Mexico, in the presidential election by collecting 56 percent of the votes cast on Tuesday and Wednesday of this week.

Stephens couldn’t help but smile and let out a sigh of relief.

“At the end of the day, I’m just really humble and really honored,” he said.

Stephens, currently SGA’s director of academic and student affairs, said he won’t hesitate while preparing for the beginning of his term as student body president, which also includes a seat on the Board of Regents.

He’ll begin his work on Monday, along with Elizabethtown graduate student Kendrick Bryan and Bardstown sophomore Devon Hilderbrandt, who were elected as the executive and administrative vice presidents, respectively.

“We will start going over stuff for next year so we are prepared,” Stephens said. “We can hash out what we can improve on and what our goals are.”

Hilderbrandt said he is confident in next year’s executive staff.

“I’m very positive now that the student body has a very strong voice in front of them, and is going to be doing great things for this campus,” he said.

Stephens will be the successor to current President Colton Jessie. Stephens said Jessie has been a mentor to him throughout his time with SGA.

“Billy is a fantastic candidate for the job,” Jessie said. “He’s been in SGA for a while and has plenty of experience. He is ready for this.”

Leal Ambriz is confident Stephens will do a good job at his position.

“The student senate is in good hands, and it’s a really good opportunity for him,” he said.

All 35 students who ran for senator positions were elected, and with 36 available senate seats, one remains open.

Although there is still a senate seat available, Leal Ambriz said he is unsure if he will stay in SGA next year. Jessie said he hopes Leal Ambriz stays on for another year.

“Diego did a great job this year, and he really cares about the student body,” Jessie said.

Stephens, as well as the other newly elected executive council members, will officially be appointed to their positions on May 10 at SGA’s end-of-the-year banquet.