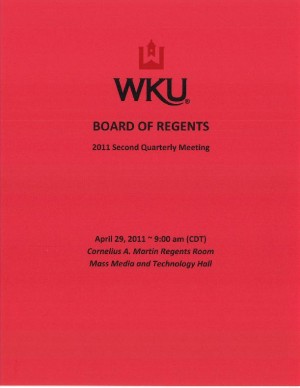 WKU’s Board of Regents will discuss the university’s six-year capital construction plan as well as a number of new academic programs at its meeting this Friday, according to agenda materials released Monday.

Friday’s meeting, scheduled for 9 a.m. in the regents room on the second floor of Mass Media and Technology Hall, is the Regents’ second quarterly meeting.

Many action items follow approvals from the Board of Regents committees, which met March 30.

The capital construction plan, which runs from 2012 through 2018, is just the initial step in the building process, said Bryan Russell, director of Planning, Design and Construction.

The plan contains projects ranging from renovations to WKU’s science buildings, $35 million in steam repairs and a new College of Business building with renovations to Grise Hall.

Longer-term projects include renovations to many academic buildings, an indoor athletics practice facility and a new parking structure.

Projects are broken up into two-year bienniums and ordered by priority. Russell said WKU has to prove a need before it secures money through both state bonds and federal funding.

“It gives us authorization to do those projects once funding has been identified,” he said.

Academic Affairs action items for Friday include approval of a doctor of physical therapy, master of arts in teaching, master of arts in social responsibility and sustainable communities and a bachelor of science in mathematical economics.

Other noteworthy action items including approval of the $70 a semester student fee to support renovations for Downing University Center.

Revisions will be made to the 2010-2011 operating budget because of a 1.4 percent state-mandated reduction for Fiscal Year 2011. WKU’s share of the budget reduction totals $1,123,100, according to the meeting agenda. Reductions by division have already been planned.

In a capital campaign update, Kathryn Costello, vice president for Development and Alumni relations, said $3.4 million has been raised toward the $5 million goal for WKU’s new alumni center. Groundbreaking for the alumni center is July 15.

Missing from the agenda was Head Coach Ken McDonald’s contract, which officials have said will have a base salary of $250,000 — down from the $350,000 he earned this year. Deborah Wilkins, chief of staff and general counsel, said Athletics Director Ross Bjork will submit McDonald’s new, four-year contract to the Regents in July.