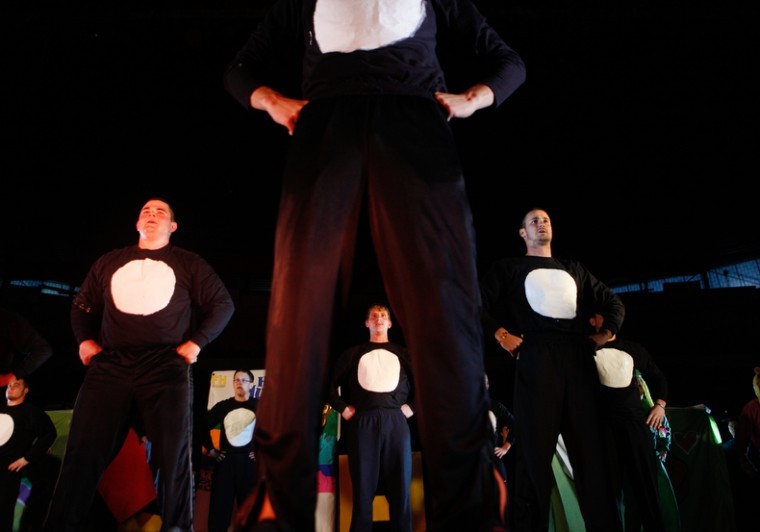 Members of Farmhouse fraternity dance to a medley of songs inspired by the board game "Hungry, Hungry Hippos" during Spring Sing on Sunday evening at Diddle Arena.

This year’s Spring Sing — the starting point of Greek Week — was titled “Greekopoly,” and each organization based its routine on a board game.

Sorority and fraternity members had eight minutes of dancing, singing and acting in Diddle Arena to prove to the judges that they had the best routine.

Lexington junior Tyler Goble, whose Delta Tau Delta group of 17 was the first to perform, said his fraternity began prepping the week before spring break.

Goble said their theme this year was the board game “Trouble.”

“It’s a story of guys who are in trouble and their redemption,” he said.

Delta Tau Delta and 20 other organizations will now wait until this Sunday to hear the results.

Goble said his group practiced for two hours a day every weekday of last week.

“We learned by doing the first few songs at a time,” he said. “We have to learn to sing and dance.”

The Delts also practiced on Saturday for five hours and two hours on Sunday.

Eleven groups on Sunday competed before a 15-minute intermission. Among those groups was Phi Gamma Delta, or the Fijis.

Nashville senior Aly Kuhn said she helped the Fijis out with their routine.

“They knew I danced and asked me to help,” she said. “This is my third year helping them.”

Kuhn said she helps the group with choreography and motivation.

Versailles junior Becca Todd added that she’s the “mother” of the Fijis.

Todd said the Fijis’ theme this year was “Truth or Dare,” and she helped out with some of the choreography.

“They call me the creative genius,” she said.

Richmond junior Malcolm Lunceford, Fiji member and performer, said that this is his third Spring Sing.

“My nerves are there, but they’ve calmed down this year,” he said. “After doing it for years, I know what to expect.”

The sorority’s theme this year was “Candyland.”

Edwards said she helped work on the group’s choreography.

She also helped pick out the people who would do costumes and props.

“I’m nervous but excited — really excited,” she said. “We definitely have a chance. Every sorority brings it.

“I love it. It’s perfect for Greek Week. It’s a convocation.”

After the first 11 performances, groups left Diddle Arena to catch their breath.

Louisville freshman Hannah DeSpain, a Phi Mu member, sat on the steps of the bleachers among other members after they had just taken the stage.

The group’s theme this year was the card game UNO.

“I was nervous before we were on, but doing it I was excited,” she said.

While Abney said she only helped with props, she felt that the group did very well.

“There were a few logistical errors, but we masked them,” she said.

Abney said that overall, Phi Mu gave one of the best performances.

“We were basically flawless,” she said. “I pray to God we win.”