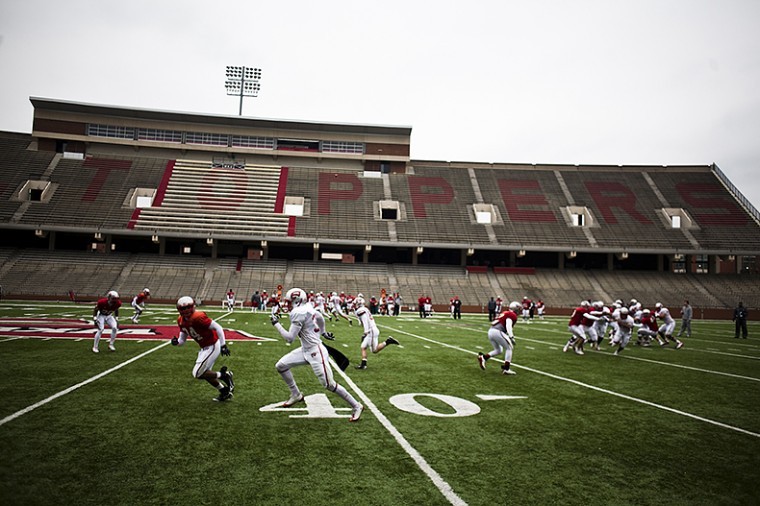 It was a situational scrimmage, rather than game style, where certain plays were repeated multiple times until the result desired was seen.

“I thought it went well,” Taggart said. “Defensively we didn’t come out with the energy and juice we’ve had all spring, and it showed. Offense did what they wanted to them. It was good to see our offense show up and have the day that they had. The last two days we didn’t play well at all.”

Taggart said he still hasn’t seen everything he wants from his quarterbacks, but he said they are continuing to improve.

“Kawaun was more accurate with it,” Taggart said. “Brandon had a lot of things running through his head, and some of the basic things he wasn’t really focused on. Kawaun had a better day from a completion standpoint. Both of them made some good plays, and both of them made some bad plays.”

Doughty completed nine passes for 110 yards and a pair of scores — a 32-yard touchdown pass to fullback Kadeem Jones and a 25-yard throw to receiver Courtney Dalcourt.

Running back Tevin Bryant is not a player of many words.

But he doesn’t have to be, according to Taggart, because his play speaks for itself.

In Saturday’s scrimmage, Byrant — a redshirt freshman — carried the ground game for the Toppers with senior Bobby Rainey sitting out and sophomore Antonio Andrews still recovering from a fractured hand.

“I’m just trying to work hard for the team and make us improve,” Byrant said. “I feel like I stepped up a lot from the fall and have came a long way since.”

During the situational scrimmage, the redshirt freshman rushed for 108 yards and had two touchdown runs, one for 10 yards and one for 25.

“Tevin is coming around,” Taggart said. “He don’t say much at all, but when he comes out, he will give you a 110 percent every time. He had a good scrimmage. He ran the ball really well. Tevin needs to hold onto the ball. He is having a really good spring, other than those fumbles.”

Bryant had two fumbles, but the first was picked up off the ground by Jones and ran in for a touchdown.

Taggart said with the offense stepping up today, it was an important time for the defense to learn.

“Scrimmage went well for the defense,” junior linebacker Tye Golden said. “We are still learning. It is a new defense, and Coach (Lance) Guidry just got here. We’ve still got some things to work on.”

Golden and Ricardo Singh led the way with six tackles each. Golden said over the next two weeks, the Toppers just want to work on mastering their defense.

“Comparing from week one, we are very far along,” Golden said. “We are learning the defense and grasping it well.”