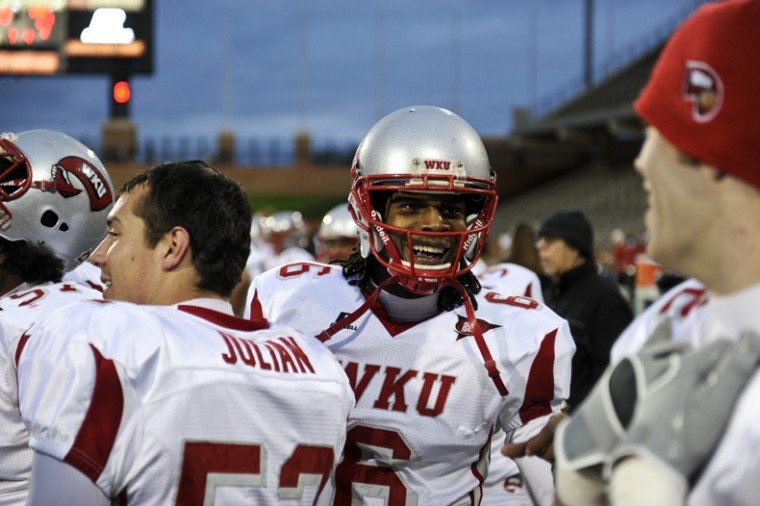 Thoughts while warming up from a cold Saturday in the Houchens-Smith Stadium press box:

In fact, the estimated 1,250 fans that attended WKU’s annual spring game on Saturday fell well short of the goal Taggart and the Toppers set earlier this spring.

Cold and rainy weather played a large role in keeping the fans away. I spoke to a few officials who genuinely expected about 10,000 with good conditions.

Taggart said after the game — which was a 27-11 win for the white team — that he truly thought WKU could have pulled 15,000 in the stadium on a nice day.

But more likely than not, 15,000 wasn’t going to happen, and WKU knew that. Bringing in 4,000-5,000 would have been a major victory and a nice step in making the spring game part of the culture here.

“The football gods have a plan for us,” Taggart said. “They weren’t ready for Coach Taggart to get his goal right now. We’re going to get there, and you have to start somewhere.”

Taggart’s right — you have to start somewhere. He did everything he could to spark interest around campus, including carrying a bullhorn to help spread the word.

Even though Taggart’s been livening things up for more than a year now, it’s the type of energy the program still needs, as the fan base has become pretty apathetic in recent years.

Students still aren’t making it to the stadium in the spring or the fall, giving almost a complete dismissal of receiving free entry to Division I football games.

But the reality is nothing’s going to draw people in like consistent winning.

Even then 15,000 would be a lofty goal. But until the program is able to fully change course, Taggart and WKU will just have to keep hitting the streets and taking what they can get.

■ It’s abundantly clear that junior Kawaun Jakes is the man to lead WKU as quarterback next season.

Jakes, the spring game’s Most Valuable Player, looked calm and poised while leading the white squad down the field. He made some crisp passes and used his rushing instincts well, gaining 40 yards on the ground on nine carries.

Having not seen any of Matt Pelesasa or Brandon Doughty last year, many — including myself — questioned if Jakes was the right person for the job.

There’s no question this year. He still has plenty to learn, but it seems the gap between Jakes and Doughty is widening every day.

That confidence and security should make for some faster progression next fall.

■ There were several others who got the chance to show their stuff in the game, including wide receivers Joel German, Rico Brown and Jamarielle Brown.

It had to bring a smile to Taggart’s face to see some of those receivers make plays, because Jakes’ maturation isn’t going to mean much if he doesn’t have any targets.

Running back Keshawn Simpson finished as the leading rusher for both teams, and walk-on linebacker C.J. Odom led all defensive players with nine tackles.

The spring game is really about the chance to see what guys like them can do. There’s not much to be learned from watching Jakes move the ball on his own teammates, but something can be said for the ones who take advantage of a chance to step up.

Just 1,250 saw those players grow up a little on Saturday, but if Taggart and company can sustain their enthusiasm, there will be more eyes in the stands down the road.