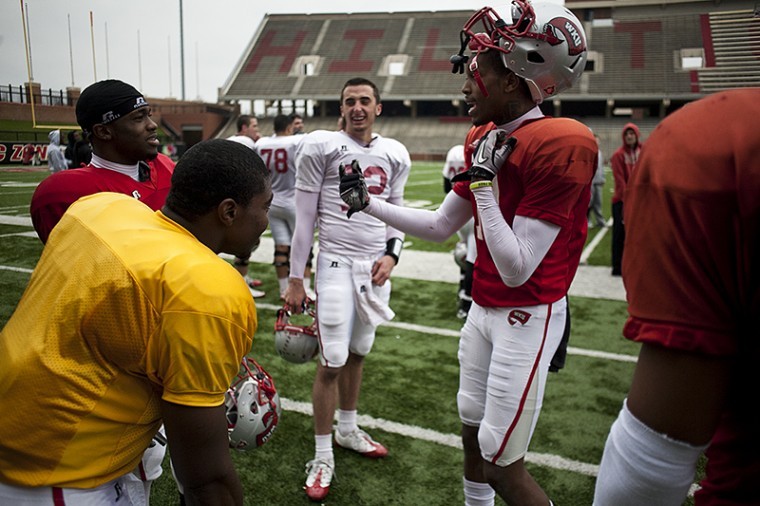 Safety Jonathan Dowling, a Florida transfer, jokes with teammates during a break from practice on March 30. The players said Wednesday that competition has led to increased trash talk as the April 16 spring game grows closer.

The trash talk for WKU’s annual spring game on April 16 was already in full force at Wednesday’s practice.

Offensive centers and guards coach Walt Wells, who’s also coaching the red team in the spring game, joked with reporters after practice that senior defensive end Jared Clendenin shouldn’t get to talk to the media because he signed with the white team.

The free agent signings that precede the spring game draft have become a fixture under Head Coach Willie Taggart. Each team is allowed to sign two players – one offense and one defense – before the draft, which will take place on Friday.

Clendenin brushed off Wells’ ribbing and replied with his own.

“Yeah, I signed with the white team,” he said. “That’s going to be the team with the W after the game.”

Allen sat out last spring due to an injury, but his performance throughout the spring has impressed Taggart and the other coaches, and he said that’s why he was the first player signed.

“I feel pretty well about it, but I don’t want to get on my high horse about it because I know that’s expected of me, and so does everyone else on this team,” he said. “I just want to go out here and perform to the best of my ability.”

Taggart said the whole reason behind the draft is to acclimate players to an NFL atmosphere.

“This whole draft thing is good for our team,” he said. “These guys want to make it to the NFL, and we try to do everything around here like they would in the NFL. I’d like some NFL players, but hopefully we can develop our guys into becoming NFL players.”

He said while the draft is mainly for the players, the coaches get a lot out of it as well.

The coaches have to recruit and convince the players to sign with their teams, and Taggart said the system gets the competitive juices flowing.

“The guys are really fired up about it, and they get a kick out of it,” he said. “I think for the players, they want to be the No. 1 draft pick. It’s competitive for the coaches too. They don’t want to lose.”

Due to the rain on Monday, the Toppers’ first practice this week was moved to Tuesday. Wednesday’s practice marked the first time all spring that they had practice two days in a row.

Allen said they were a little sluggish at first, but they picked up the energy as practice went on.

“Our bodies are a little banged up, but we’re not worried about that,” he said. “We’re just ready to keep pushing forward and take it to New Orleans next year.”

Taggart said he’s been impressed by how well the Toppers have kept their intensity all spring. He said he’s seen it from both sides of the ball as well.

The consistency has kept Taggart from getting what he refers to as “emotionally hijacked,” which he admitted was the case nearly every practice last spring.

“The guys just know what to do now. They know what to expect,” he said. “I truly believe that our guys are starting to realize how good they are. When all of them left high school, they thought they were the best thing since sliced bread.

“They need to get back to feeling that way because usually when you starting feeling and thinking that way, you do things that way. They’re starting to do that.”

Clendenin said the Toppers have been making progress each day but still have a little work to do, especially on the defensive end.

“We need to tackle,” he said. “Those guys are getting too many yards after we hit them. They’re falling forward, and we need to get them falling backwards.”

The Toppers moved their practice on Wednesday from the usual location at Houchens-Smith Stadium to the practice field between the stadium and Nick Denes Field.

Taggart said it was mostly just to change things up for the players, but there was more to it than that.

“I’ve been trying to get out here for a while,” he said. “I prefer us practicing out here. The game field is for game day. That’s got to be something special for our guys. We can’t practice out there every day because then it just becomes another day.”