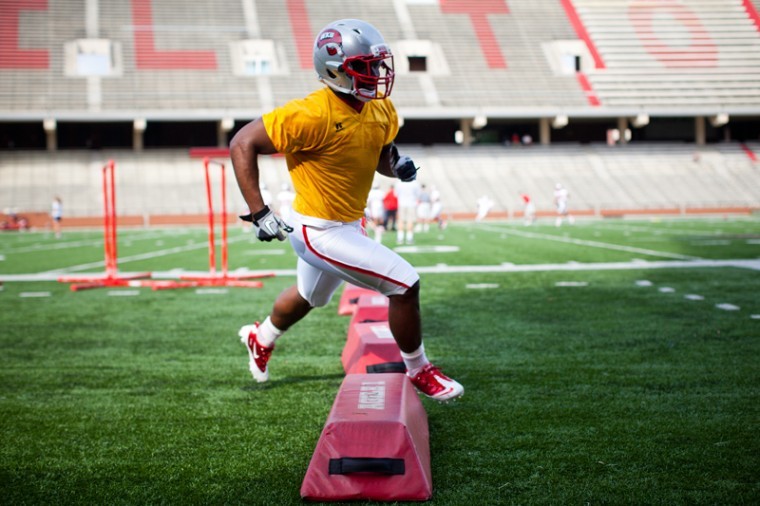 The traditional feel-good post-practice speech from Head Coach Willie Taggart did not come on Saturday.

After the Toppers’ two-hour scrimmage, Taggart used words like “disappointed” and “frustrating” to describe the offense’s performance.

“Offensively, we just came out dull like we didn’t want to be out here,” Taggart said. “Execution was poor — missing too many blocks. Some of the things we were doing earlier this spring, we are seeing them again, and we have to get that correct. “

The defense showed another consistent performance to the head coach.

“Defense stepped up today and made a lot of plays,” Taggart said. “They are playing with a lot of energy, flying around, making plays, got turnovers and got some three-and-outs.

“We want perfection. That is the attitude we want, and that is the expectation, no matter who is in there. When we are not getting it, we are disappointed we aren’t getting it.”

Taggart said with one week of practice remaining until the spring game next Saturday, the offense must start being consistent.

“We got to be consistent,” Taggart said. “We show signs, ‘Hey, we can do it,’ and then just one guy makes a mistake.”

Senior running back Bobby Rainey was back in action for the Toppers during Saturday’s scrimmage. He did not play in the scrimmage last week.

The senior finished with 103 rushing yards and two touchdowns.

Though he still wore his infamous yellow jersey, Rainey experienced contact but said it “felt good.”

Rainey also said the best way to fix the offensive struggles is to stay consistent.

“We had a spark of getting it going,” Rainey said. “We got it going, but then we came out and didn’t protect up front. It has been a roller coaster, and we have got to stay consistent.”

Rainey was drafted Friday as the first pick by the red team for the annual spring game.

Sophomore running back Antonio Andrews, who played Saturday despite a fractured hand, had a 69-yard touchdown run late in the scrimmage … Senior kicker Casey Tinius made two long field goals, nailing attempts from 51 yards and 50 yards. Tinius made just 6-of-15 field goals in the 2010 season and missed his only attempt from 50 yards or longer.