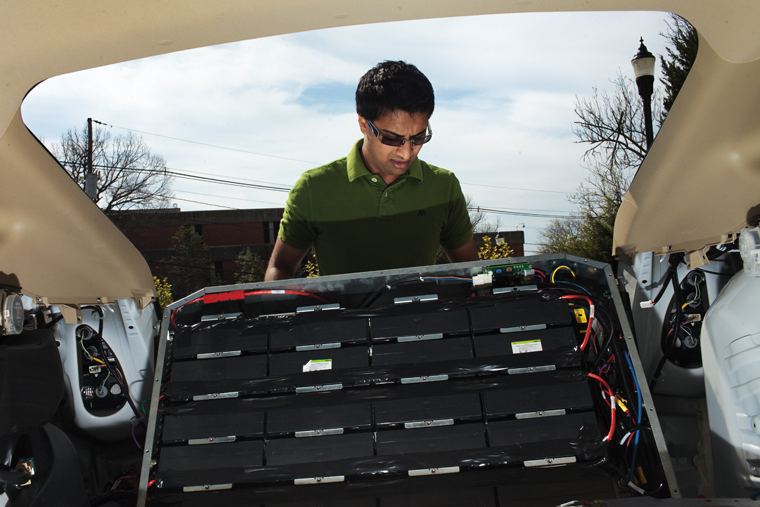 Kris Unnikannan, a junior from Dubai, United Arab Emirates, works on the wiring for a large collection of batteries in the back of a modified Toyota Prius. Unnikannan and other electrical engineering majors have been working on the hybrid vehicle under the direction of assistant engineering professor Michael McIntyre.

For their senior project, Young, of Scottsville, said they were given a stock hybrid Toyota Prius that operates on a parallel system using a battery and a gasoline engine. Their objective was to convert it into a plug-in hybrid that goes into a typical wall outlet and charges to improve fuel usage.

“We had to do the conversion and report on the effects of it,” Young said. “So from that, we came up with the ideas of testing, and we have presentations every few weeks where our faculty monitors our progress and gives us feedback.”

Young and Kessinger, of Beaver Dam, were assigned the project in September. They worked on it throughout the fall and started the actual conversion during J-term.

Young said the actual conversion took only about a week-and-a-half. This spring, they have been focusing on test driving the car.

Kessinger said they have three different planned routes: an inner city, a highway and a mixed route. The purpose of these different types of routes is to see which driving style best suits this type of car.

The students also said they have a laptop from which they monitor the car. While Kessinger drives, Young monitors progress. The laptop plugs into the car and reports on fuel use, speed, distance and the number of stops.

The project’s purpose is to see how the conversion changed the car’s functionality.

They said the car gets about 100 miles per gallon when it’s in “blended mode,” which means that the car is using both the old and the new system.

McIntyre said he had an interest in transportation problems with hybrid electric plug-in cars, so he did some research.

“The thought was if we did a plug-in/hybrid conversion, that would be something that we could probably do within that nine-month time frame,” he said.

McIntyre also said the project was supported by the Greulich Chair in Energy Systems, which is how the car and conversion kit were purchased.

McIntyre said the car was bought from Auto Be Yours in Scottsville, Ind., a dealer that sells only used Prius cars. The conversion kit came from Plug-In Supply.

He said Young and Kessinger get four credit hours for the project. They take EE400, which is a one-hour class, and EE401, which is a three-hour class.

Kessinger said the kit they used to convert the car was “fairly straightforward.”

“I was able to get on their website and pull out their manual on how to install it, so we basically read through and just tried to take it step by step,” he said.

Young and Kessinger presented their project in March at the Renewable Energy Workshop in Louisville. They were the only undergraduates that presented.

Young said people seemed to be attracted to their project because it was something they could relate to and understand.

Both students said they were grateful for the opportunity.

“We lucked out,” Kessinger said.