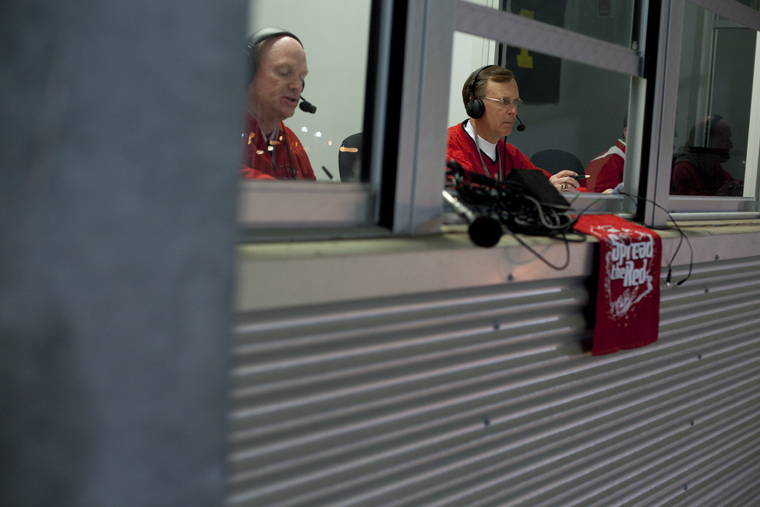 President Gary Ransdell, right, provides color commentary with Randy Lee on the radio in the press box at Bowling Green Ballpark, where WKU beat Louisville 15-5 on April 5. Ransdell and several other guests make appearances as analysts for WKU baseball games.

Those who tune into WKU baseball broadcasts may hear some unexpected voices coming across the radio.

While the Topper baseball team is enjoying another winning season under Head Coach Chris Finwood, prominent faces on campus have been joining WKU’s Big Red Radio Network as analysts to call the action.

Randy Lee, known as the “Voice of the Hilltoppers,” said the idea to have celebrity guest analysts came about four years ago as a way to add excitement to the Topper baseball program.

“We wanted to spice it up and get more people involved,” said Lee, WKU’s regular play-by-play announcer. “We felt like it would be interesting to have different voices on the radio, not just to talk about the game but to talk about their respective sports.”

Perhaps the most well-known of the guest analysts, Ransdell was also the first person whom Lee invited to go on the air.

Ransdell’s two sons, Patrick and Matthew, both played baseball at WKU, so Ransdell had plenty of familiarity with the program.

This year, he called WKU’s Opening Day win over Bowling Green State and the Toppers’ 15-5 win over Louisville on April 5 among other games, and he’s scheduled to broadcast four more regular season contests in 2011.

Ransdell said working on the radio is “a great diversion.”

“No matter what kind of a day you’ve had at the office, to come back and be able to do that is fun,” Ransdell said. “For two or three hours, you’re just focused on what’s happening on the field.”

Ransdell said his favorite memory of calling Topper baseball was being on the radio for WKU’s come-from-behind, 10-9 victory over Ole Miss in the 2009 NCAA Regionals.

Lee said many Mississippi locals who listened to Ransdell call the action that day were surprised to learn he was the university’s president.

“I don’t know of any other presidents that broadcast baseball on the radio,” Lee said. “All the Ole Miss people couldn’t believe that Gary was doing it, and then when they heard him, how good he was.”

Taggart, who called the Sunday game of the BGSU series earlier this season, said it was tough to “follow up a pro like Dr. Ransdell.”

Taggart said that since he didn’t play baseball growing up because he was “afraid to get hit by that little ball,” he wasn’t as knowledgeable about the sport as some of the other guests.

“I called (former WKU football coach Jack) Harbaugh the night before I went on the air,” Taggart said. “He taught me about some baseball expressions like ‘ducks on the pond,’ meaning that the bases are loaded.

“But while I was on the radio I learned a lot more about baseball than what I already knew. Next time I want to come back and be one of the best.”

While baseball wasn’t a topic of expertise for Taggart, it is for Sanderford.

Sanderford played both college and professional baseball and called the sport his “first love.”

He said that serving as a color commentator for radio is fun for him because it requires staying focused on the game.

“Usually if I’m at a baseball game, I wind up talking and missing three innings,” Sanderford said after calling WKU’s 2-1 win over Louisiana-Lafayette on April 9. “But the radio is the one time I get to watch a game like a coach.”

Lee said the one common factor between all his guest analysts is the respect they all have for Finwood’s baseball program.

“Everyone likes Chris,” Lee said. “He’s such a team player, and I think people enjoy being a part of his program.

“They get a chance to talk to him on the postgame show, and I think you can just tell how much he appreciates them coming to the game and being a part of the radio broadcast, and I think they just appreciate how comfortable Chris makes them feel.”

Sanderford said he and the other guests share not only respect for Finwood, but a love of the game and a love of WKU.

“Most of the people he has in there have a baseball background,” Sanderford said. “We’re Western people first, and we’re all about the program and the kids.”