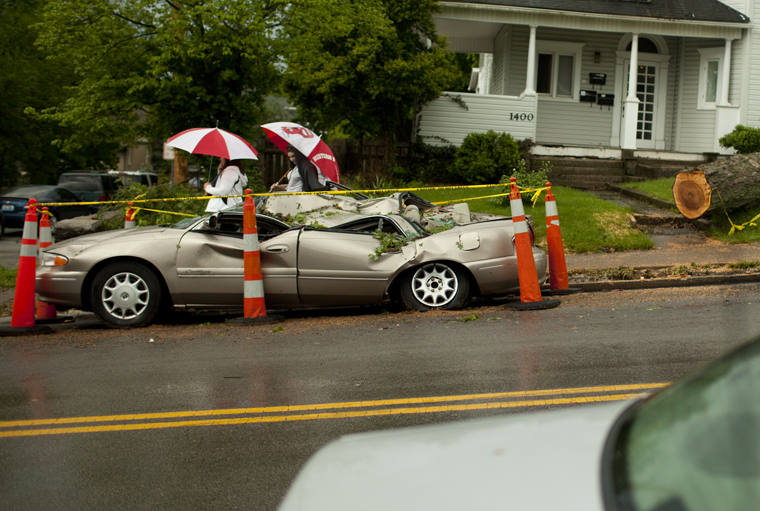 Owensboro graduate student Eric Vanover’s car sits on the Hill on College Street. The car was smashed by a tree from the storms that swept through Bowling Green this week. “It’s demolished,” Vanover said. “It was mine for a total of two days.” His previous car was totaled in an accident days before.

A late-model sedan crawled around the Minton Circle on Tuesday night, the driver laying on the horn while a passenger yelled “tornadoes are coming, ya’ll!” out the side window.

Although a tornado never struck Warren County, severe weather warnings and constant rain were a fixture in Bowling Green this week.

Almost 5 inches of rain was recorded from Sunday through Wednesday on Warren County’s Kentucky Mesonet site — an automated weather station — on the WKU farm. Just over 10 inches have fallen this month, with a single-day high of 3.08 inches Wednesday.

The state’s record rainfall for April, according to a WKU press release, was 16.87 inches in 1970 at Addison Dam in Breckenridge County.

“The key idea here is that when you look at the globe from perhaps an outer-space view, there are these very large-scale circulations that, once they’re in place, they tend to persist,” said Stuart Foster, state climatologist and director of the Kentucky Mesonet and the Kentucky Climate Center.

The Mesonet, centered at WKU, saw its start in 2007 with the WKU farm location.

There are now more than 50 Mesonet stations statewide collecting real-time data for factors such as temperature, precipitation and wind speed, according to a WKU press release.

The Mesonet in Calloway County, for instance, recorded a 101 mph wind gust at 12:25 a.m. on Tuesday, according to the release.

“Without the Mesonet, we would have a much smaller number of sites around the state covering data,” Foster said. “It wouldn’t be available on a five-minute basis or real-time basis.”

Bryan Russell, director of Planning, Design and Construction, said there have been no problems with surface-water flooding on campus this week. Russell said the basement floor of Cravens Library had to be evacuated because of rising groundwater, relocating the staffs for departments such as leadership studies to Tate Page Hall.

“That building’s been there for 35, 40 years, and all of a sudden we’ve had a few situations,” Russell said.

John Osborne, vice president of Campus Services and Facilities, said WKU will reassess the flooded space before moving back.

Osborne said WKU has been fortunate this week considering that right down the road, Murray State University closed its main campus  Tuesday because of severe weather.

Owensboro junior Kyle Mattingly, a frequent poster on the blog, said weather such as this week’s helps students apply what they’ve learned in the classroom.

“If we see an event coming a week away or something, we’re going to start discussing it on the blog,” Mattingly said.

The blog can be accessed at meteorology.blog.wku.edu.

Weather this academic year has been noteworthy for more than just April’s showers.

Winter snowfall in Bowling Green topped 20 inches for the first time since the winter of 1978-1979, more than doubling the 10-inch average.

Foster said using these real-world examples from the Mesonet in his data analysis and research methods classes has added to the learning process.