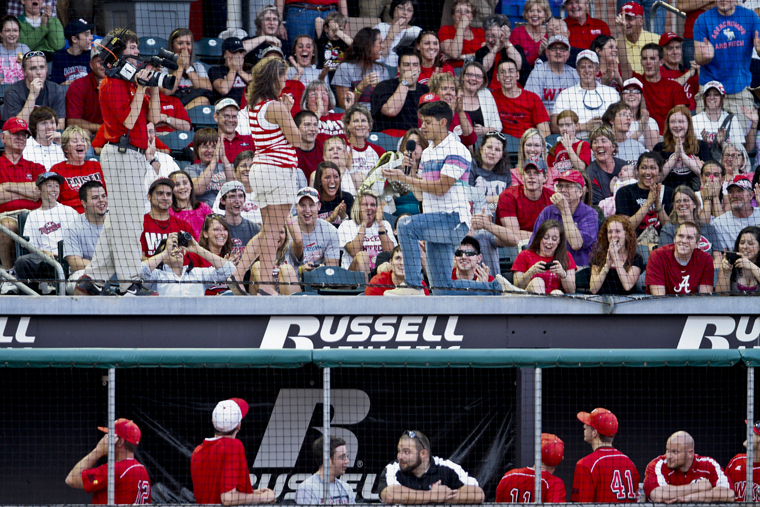 Elizabethtown senior Gordon Deming proposes to Owensboro junior Lauren Coomes during WKU’s game against UK on Tuesday at the Bowling Green Ballpark. Deming and Coomes have been dating for the past 7 months. WKU beat UK 11-8.

The 5,142 people that showed up created the largest crowd to see a college baseball game in the state of Kentucky this year.

That followed last year’s crowd of 6,183 at the ballpark, which was the largest to ever watch a college baseball game in the state.

Both crowds were well above the average of about 800 fans that have attended home games at Nick Denes Field this season.

Some fans admitted that the importance of a game against Kentucky attracted them. Others said WKU games at Bowling Green Ballpark are more of a social event than anything else.

“It’s absolutely social,” WKU graduate Mackenzie Lee said. “I haven’t watched one single game. It is 100-percent social. It is the Western vs. UK — that’s a big game, so you know a lot of people are going to be here. But it’s just something to do.”

The Toppers have played three games at Bowling Green Ballpark in the past two seasons — two against Kentucky and one earlier this season against then No. 25-ranked Louisville.

Even on a chilly night in early April, 2,523 fans showed up to see WKU play Louisville.

Athletics Director Ross Bjork said he’s not surprised that more fans go to the games at the home of the Single-A Bowling Green Hot Rods.

“It’s a novelty to come to a ballpark like this,” he said. “The students can come and hang out away from campus, and they can have fun in a different environment.”

While some view the game as a social event, plenty of loyal fans show up at both venues.

Franklin senior Asa Cummings said he goes to a lot of games at Nick Denes Field. But he said the games at Bowling Green Ballpark give fans a mix of both good baseball and a good social environment.

“It’s great to come out to the Western games here,” he said. “You get the social aspect because you’ve got your fellow students, and then you get your Greeks out here, and everybody gets to come to the game.”

Bjork said the ultimate goal is to have more games downtown.

He said a lot of the scheduling is still uncertain, especially the Toppers’ future with Kentucky.

Head Coach Chris Finwood said the Toppers will continue to play Kentucky but will play them just once each season, alternating sites. He said in the years they host the Wildcats, the game will be played at Bowling Green Ballpark.

Bjork said Louisville will continue to play WKU at Bowling Green Ballpark, and Vanderbilt may also begin playing at the stadium when the Kentucky game is away, assuming dates and availability permit.

WKU won’t announce which games will be at Bowling Green Ballpark in the 2012 season until the team’s media day next winter.

“I think Bowling Green offers a Single-A environment, and they have the fan base that will come out not only to just watch Western, but watch the entire tournament as well,” he said.

Bjork noted that certain logistical issues stand in the way of hosting those events right now, such as money and coordinating with the Hot Rods on open days.

But nonetheless, Bjork said he knows that games at Bowling Green Ballpark are popular, be it for watching baseball or just socializing, and wants to continue having games there down the road.

“Our fans love it,” he said. “They can be close to the action in a professional ballpark. Our players love it, because it’s a pro ballpark. So it’s just a perfect setting across the board on many different levels.”