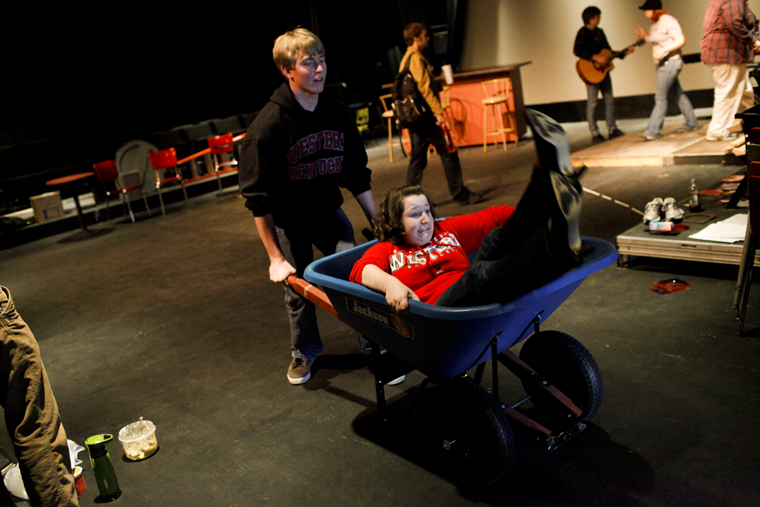 Florence freshman Nic Baynum pushes Louisville freshman J. Morgan Shaffo in a wheelbarrow while practicing the song "Shoot the Moon" during rehearsal for "The Spitfire Grill." The play opened yesterday in the Gordon Wilson Lab Theatre and will take place again tonight at 8 p.m. Admission is $5.

“letter-spacing: 0.3pt;”>Something’s cooking tonight at “The

Spitfire Grill,” the latest production from the WKU theatre and

The show is a musical that follows the Percy Talbott, a young woman

Once there, she finds the town in dire conditions, but through her

The performance will be tonight at 8 p.m. in the Gordon Wilson Hall

lab theater, and admission is $5.

not a stereotypical musical.

“It isn’t campy like other musicals are,” Tabor said. “Other

musicals are all about love and happy endings. There is some of

and characters are relatable.

“It’s a good connection kind of musical,” Shaffo said. “You will

see yourself or someone you know somewhere in this story.”

Shaffo used her own character, Effy Katshaw, the local gossip and

“She is nosy, she just wants to be involved in everything,” Shaffo

said. “She just tries a little too hard, so no one wants to let her

Kaitlyn Fouts, a sophomore from Bowling Green who performs the lead

role, said she thinks the show has something for everyone to enjoy

story about hope, which is really what people need nowadays.”

The musical accompaniment will be performed live during the show by

a guitarist and pianist, and features music that is somewhere

between southern rock and country, with some folk overtones.

The performers range in experience from those who began acting and

singing in college to those who began at an early age, such as

Fouts, who first acted when she was 5 years old.

Jon Meyer, a junior from Cincinnati who plays the sheriff,

and to help the department.

“Keep coming out to support theater events,” Meyer said. “We