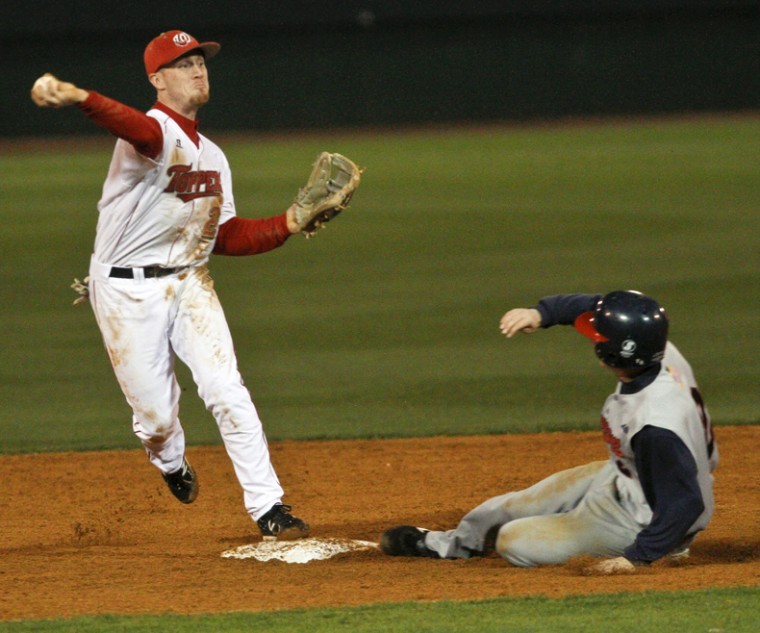 WKU’s loss to Belmont Wednesday was a game the Toppers will hope to soon forget.

Seven WKU pitchers combined for 10 walks, two hit batsmen and just one strikeout as the Toppers (16-9) fell to the Bruins, 9-8, in 10 innings at Nick Denes Field.

“When you give 12 free base runners and only strike out one, that’s about as bad as it gets on the mound,” Finwood said. “That’s as bad as I’ve ever seen.”

With Belmont’s Nate Woods on first in the 10th inning and one out, Belmont right fielder Tim Egerton hit a groundball at freshman infielder Scott Wilcox, who was playing shortstop in place of Logan Robbins.

The grounder had double-play potential, but it rolled between the legs of Wilcox, and the Toppers didn’t get an out on the play.

Both Woods and Egerton eventually scored on a RBI single from Bruin shortstop Jared Breen, giving Belmont the 9-7 lead it needed.

“We didn’t play good behind (the pitchers),” Finwood said. “But they’re not going to play well when you’re all over the place, and they’re standing around and cold.

“We dropped two balls in the outfield, which was uncharacteristic, and our freshman backup shortstop missed a routine double-play ball, which was probably the game right there.”

The poor pitching and defense wasted big nights at the plate for junior third baseman Casey Dykes and senior Matt Rice, who started at designated hitter before moving behind the plate in the 10th inning.

Dykes tied his season high with three hits in his four at-bats.

He also tallied three RBIs, drew a walk and scored a run.

Meanwhile, Rice moved into second place on WKU’s career RBI list after a two-run, ninth-inning home run that tied the game at seven.

The two RBIs gave Rice 190 for his career, moving him past former Topper Ralph Antone.

But when asked about the accomplishment after the game, Rice said he wasn’t even aware he had passed Antone.

“All I care about is winning games,” Rice said. “No one remembers stats in baseball. All anyone remembers is who wins.

“Tonight we had 10 walks, two hit batters and one strikeout. So you’re not going to win very many games that way.”

Davis’ start Wednesday marked the second consecutive night that a Topper relief pitcher got an opportunity to start.

Junior right-hander Phil Wetherell pitched Tuesday against Louisville, working four innings and giving up one hit and one unearned run in WKU’s 3-1 loss.

But Davis was less successful Wednesday, something that frustrated Finwood.

“Rye was just pretty average tonight,” Finwood said. “Yesterday Phil threw the ball real well in his start, but it didn’t work out too well tonight.”

Finwood said much of Davis’ early-season performances were due to poor mechanics and delivery.

But he said the walks from his young pitchers were “hard to stomach.”

“Freshmen are going to make mistakes, but walks just aren’t competing,” Finwood said. “That’s guys being scared to throw the ball in the strike zone. And it’s hard to coach that.

“If you’re scared to throw strikes, then you’re going to have a hard time ever pitching here, and that’s what I told them.”

The Toppers will spend Thursday traveling for a weekend series at Arkansas-Little Rock.

First pitch is 6 p.m., and it will be a chance for WKU to end a three-game losing streak and maintain its first-place spot in the Sun Belt Conference standings.

Robbins, who is suffering from phlebitis, an inflammation of the foot, will miss the series.

That makes Perkins’ Friday outing even more important in the eyes of Finwood.

“Tanner’s been throwing the ball well, so we’ll need him to throw the ball good for us again on Friday,” Finwood said. “Hopefully it’ll warm back up, and the bats will get going.

“Anytime you can win a road series, that’s a leg up on everyone else. We’ve just got to go in and play a little bit better.”