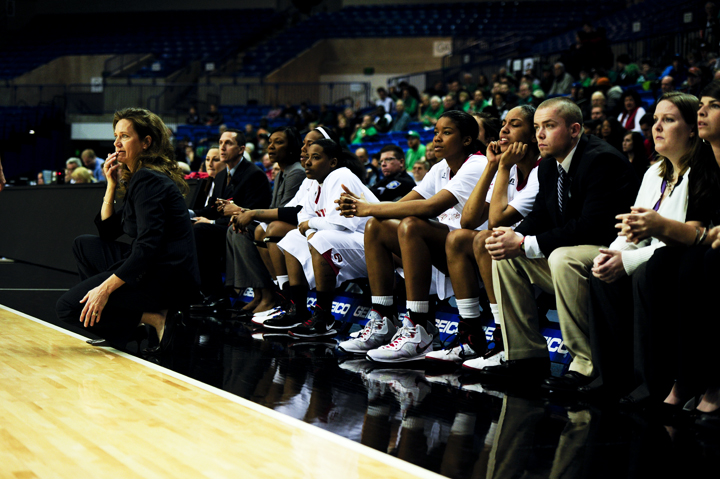 HOT SPRINGS, Ark. — As the Lady Toppers knocked off North Texas 81-66 to advance to the second round of the Sun Belt Conference Tournament on Saturday, Denver’s players and coaches watched from the stands adjacent to the WKU bench.

With North Texas entering the tournament on a 10-game losing streak, it’s safe to say the Pioneers expected a second-round matchup with the Lady Toppers.

Denver, the No. 2 seed out of the Sun Belt’s West division, earned an opening-round bye. Sunday’s 12:15 p.m. game on Convention Center Court will be the Pioneers’ first game since a Feb. 26 win over North Texas.

“I think what makes Denver so good is they’re so disciplined at both ends of the floor,” Cowles said.

The Lady Toppers will keep a close eye on Denver forward Kaetlyn Murdoch, who averages 16.3 points per game and shoots almost 60 percent from the field.

Murdoch scored a game-high 22 points at Diddle Arena on Jan. 5, when the Lady Toppers squandered a 10-point lead and lost, 51-50.

Cowles said the Lady Toppers’ goal on Sunday will be to replicate their form from Saturday’s win over North Texas — and avoid another meltdown like they had the last time around against Denver.

“I think there’s some things that we did positive in the first game, but we made some pretty crucial mistakes in that game as well,” Cowles said. “So hopefully we can build on the positives, fix those mistakes and come ready to play and bring this type of focus again.”