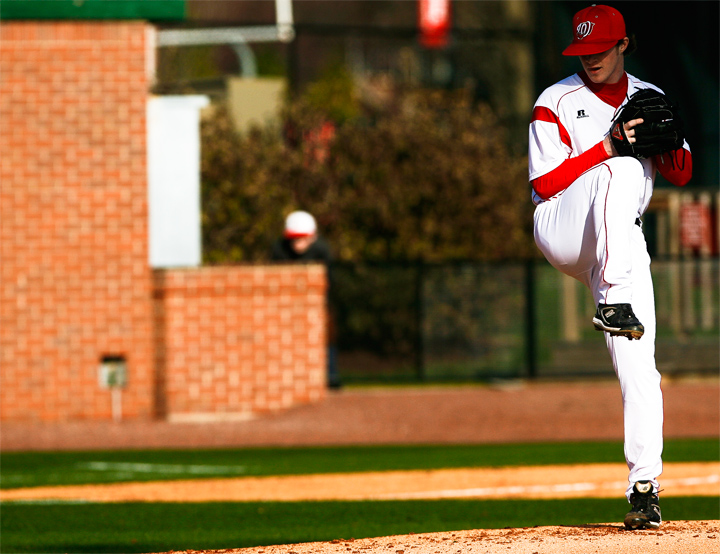 WKU coach Chris Finwood surprised some when he named sophomore Tanner Perkins his Friday night starter before the season.

But after leading WKU (8-5) to a 3-1 victory over Illinois (3-7) at Nick Denes Field Friday, Perkins has solidified his spot as the Toppers’ ace.

The left-hander retired 21 consecutive batters between the second and eighth innings, allowing just one run and three hits while pitching the first complete game of his career.

Finwood called Perkins the “hero of the day.”

“That’s what he’s capable of,” Finwood said. “Complete games in college baseball are a pretty big rarity, and he was just great today. He kept everything down, mixed his pitches and let us play defense behind him.”

“Getting in a rhythm is a key for me,” Perkins said. “(Pitching coach Matt) Myers kept the signs coming in, and (senior catcher Matt) Rice relayed the signs to me real quick which helped a lot.”

While Perkins delivered his best performance of the season, Illinois got a solid performance from its starter, right-hander Kevin Johnson.

Perkins said the performance of Johnson motivated him while he was on the mound.

The performance of both pitchers kept the game time to a season-low one hour and 39 minutes.

WKU scored the game’s first run in the third inning, when junior left fielder Jared Andreoli advanced home on a balk by Johnson.

The score stayed at 1-0 until the sixth inning, when junior right-fielder Ryan Hutchison hit an RBI double to left field.

Junior shortstop Logan Robbins followed with a single smashed off the glove of Illini third baseman Brandon Hohl, pushing the Topper lead to 3-0.

Illini left fielder Casey McMurray then came to the plate representing the tying run but popped up to WKU junior second baseman Ivan Hartle to end the game.

The Toppers have won all four games they’ve played this year at Denes Field.

However, Friday’s game was the first time they’ve been home since sweeping Bowling Green State in the first series of the year.

WKU finished a season-long road trip Wednesday, on which they played four ranked opponents, including No. 2 Vanderbilt.

“It was a long, long road trip,” Hutchison said. “We played lots of good teams on the trip, but it feels really good to be home.”

Freshman right-hander Justin Hageman will pitch for WKU on Saturday. He has a 2-1 record and a 2.25 ERA in his first season as a Topper.

Hageman will oppose right-hander John Anderson of Illinois. Anderson is 1-1 on the season with a 2.76 ERA.

Finwood said the nine-inning effort from Perkins Friday will benefit the Toppers for the rest of the weekend, especially after using six pitchers in a 7-3 win over Ole Miss Wednesday.

“We used all those guys on Wednesday to beat Ole Miss, and we got to give them an extra day off,” Fiwnood said. “Now you get those guys loaded up and ready for the next two ballgames.”

With a rested bullpen and Hageman on the mound, Perkins said he likes WKU’s chances for a series win.

“We’ve got to come out and pitch and jump out on those guys tomorrow,” Perkins said. “Our hitters were on the bus for a week, so it’ll take awhile to get that out of us, but we’ll be alright tomorrow.”

Junior center fielder Kes Carter was out of the lineup Friday because of a calf strain suffered Wednesday against Ole Miss. Finwood said Carter is day-to-day … Freshman Jordan Cessna started in center field for the first time in his career Friday. He went 0-for-2 with a walk and a strikeout … WKU now trails Illinois 7-2 in the teams’ all-time series.