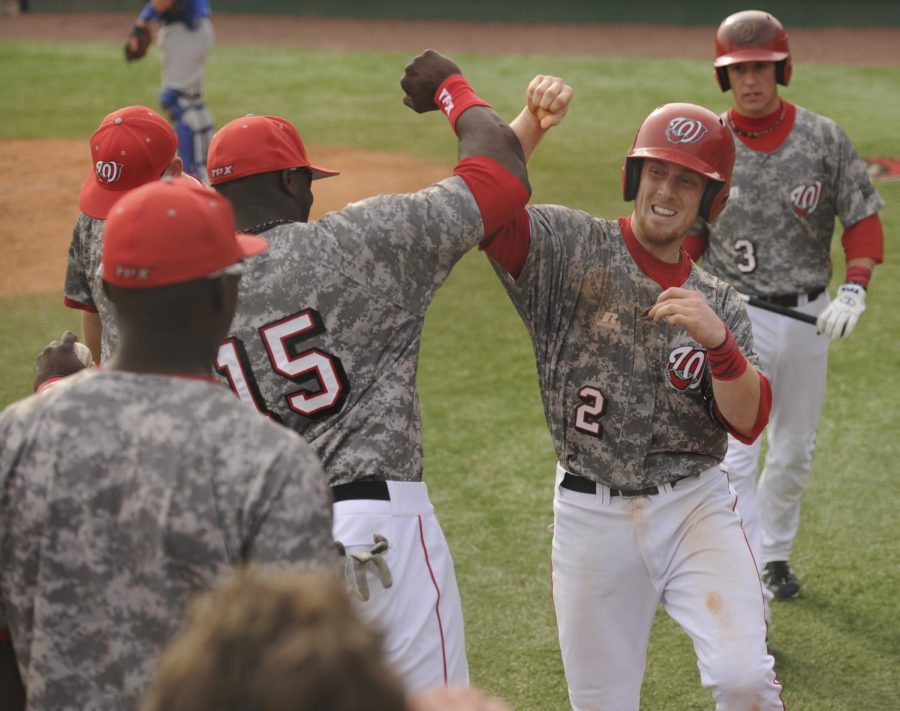 But the Toppers finally broke the power slump Saturday, hitting three home runs on their way to a 10-4 win over Middle Tennessee.

Junior left fielder Jared Andreoli hit two of the round-trippers, a fourth-inning solo homer that scraped the right-field wall and a two-run shot in the seventh.

“The wind turned around a little bit for us today,” WKU Head Coach Chris Finwood said. “It was blowing out to right, and we got a couple of balls hit hard that way that got out of the park.”

For Andreoli, it was his first career multi-home run game.

He said the Toppers are starting to get used to the newly instituted aluminum bats that were designed to reduce “trampoline effect,” and have therefore caused a decrease in power numbers across college baseball this season.

“You’re not going to get any cheap home runs this year,” Andreoli said. “It can feel frustrating when you keep hitting balls to the warning track, but it always feels good to get one out of here.”

Overshadowed by the home runs was perhaps the biggest Topper hit of the day, a third-inning, bases-clearing double from junior shortstop Logan Robbins that pushed the early WKU lead from one run to four.

Robbins finished 3-for-5 on the day with the three RBIs, one of several Topper batters who had a good day at the plate.

WKU banged out 11 hits, drew five walks and reached three times after being hit by pitches.

“The thing we did today that we didn’t do (in a 5-2 WKU win) yesterday is that we were just much more opportunistic on offense,” Finwood said. “It’s not how many hits you get — it’s when you get them. And today we got them at the right time.”

The runs provided plenty of support for freshman pitcher Justin Hageman, who took a shutout into the seventh inning.

The Hopkinsville High School alum surrendered four earned runs in his last inning of work but still earned the win, his third of the season.

His win came on the heels of a two-run, eight-inning outing from sophomore left-hander Tanner Perkins Friday night.

“I was hitting my fastball locations, and I got a few good curveballs over the plate,” Hageman said. “They changed their approach after a while and started swinging early, so I was able to get some quick innings.”

Andreoli said Hageman’s performance provided a lift for the lineup.

“Justin threw unbelievable today,” Andreoli said. “It’s real nice when we put up a run and he comes back and gets a zero for us. He looked good in his first conference start as a freshman, and I think he’ll keep it up.

“If he and Tanner want to keep spoiling us with good starts, then go ahead. We’ll take it.”

With Andreoli’s three runs batted in Saturday, he is now second on the team with 21 RBIs this season.

Finwood, who has been known to use a variety of lineups, said Andreoli will likely stay in the leadoff spot, despite the power numbers.

“It’s funny you’ve got a guy leading off with that many RBIs, but that just means the bottom of your lineup is doing a pretty good job getting in scoring position,” Finwood said. “He just has tough at-bats, and it seems like we’re settling into a lineup with him leading off.”

WKU will go for a series sweep Sunday afternoon at 1 p.m.

Finwood said his team needs to not be satisfied with the series win, but that WKU needs to clinch a sweep Sunday.

“We are glad to have won it, but you need to take advantage because they all add up at the end of the year,” Finwood said. “Getting the chance to sweep somebody, especially your big rival in the league, just gives your guys a lot of confidence moving forward.”