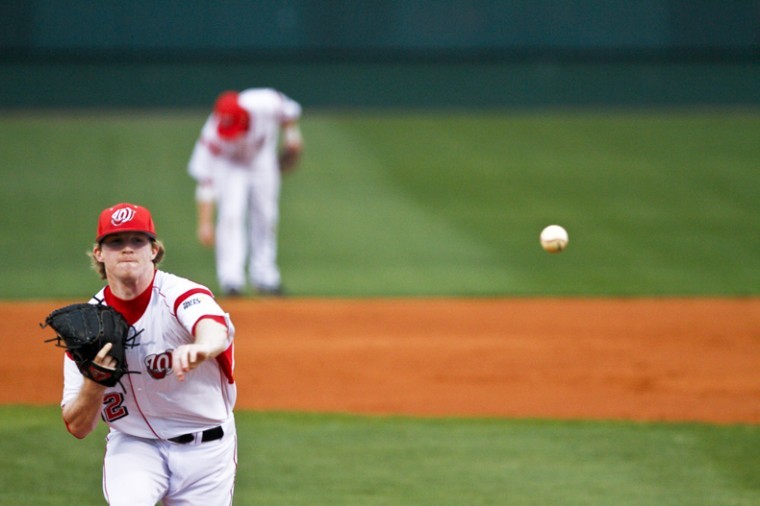 Another Friday start, and another dominating performance from Tanner Perkins.

The sophomore left-hander pitched eight innings Friday, giving up two runs — one earned — five hits and no walks, and striking out a career-high 10 batters while leading WKU (11-6, 1-0 Sun Belt Conference) to a 5-2 win over Middle Tennessee (5-11, 0-1 Sun Belt) at Nick Denes Field.

It was Perkins’ first start since a two-hit complete game win over Illinois last Friday.

“To come out in the Sun Belt opener with 10 strikeouts and no walks, I thought it was another outstanding start by him,” Head Coach Chris Finwood said. “He fought through a few innings, then we gave him a run, and he went out there and started throwing up zeros.”

The turning point for Perkins came in the third inning, when the game was tied at two.

With runners on the corners and no outs, Perkins induced a ground ball to third from Blue Raider first baseman Davis Pearce.

WKU junior third baseman Casey Dykes scooped the ball up quickly and fired to junior second baseman Ivan Hartle, who stepped on the bag and gunned down Pearce at first for an inning-ending double play.

The Toppers scored the go-ahead run in the bottom of the third on an RBI single from junior center fielder Kes Carter.

Perkins then went on to pitch five straight perfect innings, sitting down the last 16 batters he faced.

“I love getting in a rhythm out there,” Perkins said. “If you can continue to pound the strike zone out there, the guys in the box are on their heels. They’ll hit ground balls to our players, and we’ll be all good.”

Finwood said Perkins “has learned how to pitch.”

“At one point during our game, I told (former WKU pitcher and volunteer assistant coach) Matt Hightower, ‘Tanner reminds me of you tonight,'” Finwood said. “He kept his changeup down and everything else down, and gave everyone else a chance to play behind him.”

He could’ve suffered more damage had right fielder Will Skinner not made two diving catches, one of which robbed Dykes of a potential bases-clearing extra base hit in the third inning.

It may be safe to say Topper fans also enjoyed Carter being back in the lineup after missing the last four games with a calf strain.

“Kes is our best player, arguably,” Finwood said. “Getting him back in the lineup gives everything a boost. It balances our lineup a little more and helps us move some other guys around.”

Friday was the first time Carter has hit fourth all season.

Junior Ross Hammonds came into pitch the ninth inning and allowed just one base runner while picking up his first save.

Following the game, Finwood and Topper players, including pitchers Rye Davis and Brian Edelen, got their heads shaved as part of a St. Baldrick’s philanthropy event being put on by the Omega Phi Alpha sorority.

“It’s a great cause, and we’re happy to help out anyway we can, especially with kids’ cancer,” Finwood said. “I went to a military college (Virginia Military Institute), so I’ve had my head shaven plenty of times.”

Finwood and the other participants will get to show off their new haircuts when WKU meets MTSU at 3 p.m. Saturday for the second game of the three-game series.

Carter said winning the conference opener was “definitely a confidence-builder.”

“It helps out a whole lot,” Carter said. “It’s always good to get it going early and show them who’s boss.”