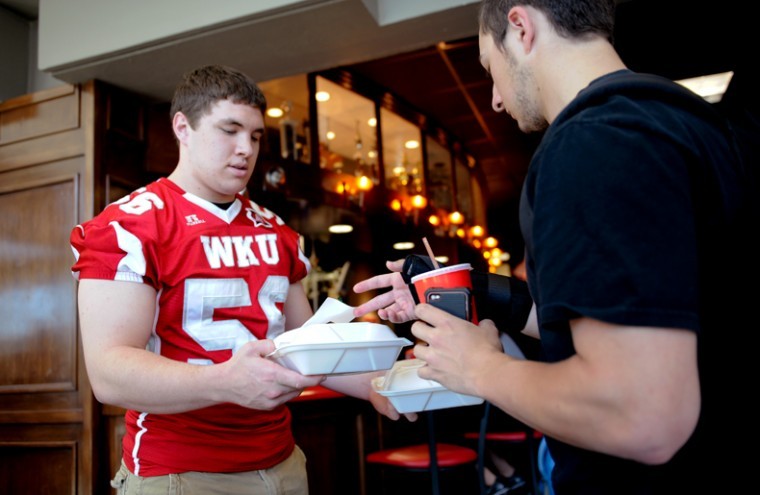 Freshman linebacker Matt Smith delivers food in Red Zone Thursday afternoon. Smith, a Bowling Green resident, said he and other WKU football players were helping " to get to know the students, and so the students can get to know us."

The wait is over for Head Coach Willie Taggart, as the WKU football team begins spring practice on Monday.

Monday will be the first of 15 spring practices over a period of four weeks, before the annual spring game at 5 p.m. on April 16.

Practices will be held on Monday, Wednesday, Friday and Saturday for the first three weeks and on Tuesday and Thursday during the final week.

“I’ve been waiting for spring practice to start since that Monday after we lost to Troy,” Taggart said. “Seeing the attitude change and guys walking around with a little more confidence has been getting me fired up about what we can do. I’m looking forward to getting to spring ball and seeing how far we’ve come.”

Last year, Taggart stepped into the position of head coach with a football team that hadn’t won a game since Sept. 20, 2008.

Although the Toppers broke the losing streak by winning two games in 2010, Taggart said he expects even bigger things this year.

“It is totally different than it was last year,” Taggart said. “We have a year under our belt, and everyone knows the expectations. Everyone has gotten through the trust part. We had to deal with that all year on top of the monster we had with us.

“We had to exercise those demons. We had to implement a new offense, defense and special teams. Guys had to deal with all that.”

With players entering their second year under Taggart, he said it is a huge jump compared to where they were starting practice last season.

“This past year, trying to get used to this new offense was bigger than most realize,” Taggart said. “It was totally different. It was asking them to do a lot more. I expect for every last one of them to be top-notch.”

Lately, WKU students can see the football team off the field as they participate in community service activities around campus.

This past week, players have been serving food to students at Red Zone in Downing University Center.

Taggart said the service is an attempt to not only bring the team closer, but the fans as well.

“They don’t know what our guys look like,” Taggart said.” They think, ‘Oh these big football players are mean,’ and a lot of them are just big teddy bears. Not on the football field though.

“It has been really important for me for them to come together in community service or team activities. I think that was something we were missing last year.”

Having the players in the public eye is also a way for Taggart to advertise his newest goal. The coach is asking 15,000 fans to attend the spring game on April 16.

It would be the first time a team in the Sun Belt Conference has been able to get 15,000 to attend a spring game.

“It’s all about changing our expectations around here,” Taggart said. “We have a great opportunity as a community, a university and a football program to do something big here. Some people look at me like I’m crazy when I say that. No one has ever really tried to get 15,000 at a spring game.

“We have enough of them out there that believe in these Hilltoppers. Bring a neighbor, bring a homeless guy – bring them all.”

Competition at the quarterback position

Although sophomore quarterback Kawaun Jakes started every game last year, Taggart said to expect competition at the position during the spring.

Both Jakes and freshman Brandon Doughty will enter spring practice competing for the spot.

“It’s competition,” Taggart said. “Kawaun understands that, and Brandon understands it too. That’s what he signed up for. I want them to come out and compete and the best man to win. We have high expectations and respect for that position.”

“Last year, you saw our quarterback position manage our offense,” Taggart said. “This year, it has got to be a weapon for us and make big plays for us. That’s what we’re looking for.”

Rainey will not be hit in spring practice

Taggart said Monday that junior Bobby Rainey will once again be wearing a yellow jersey, which denotes that he cannot be touched, during the four weeks of spring practice.

Taggart said the running back, who ranked third in rushing in the Football Bowl Subdivision last season, would not be hit due to fear of injury.

“A Bobby clone is what we are looking for this spring,” Taggart said. “But he will be out there. He is excited and he is doing a really good job leading our football team this offseason. That’s a big reason I’m fired up for this spring.”