Toppers use late run to dispatch Monroe, move on to second round 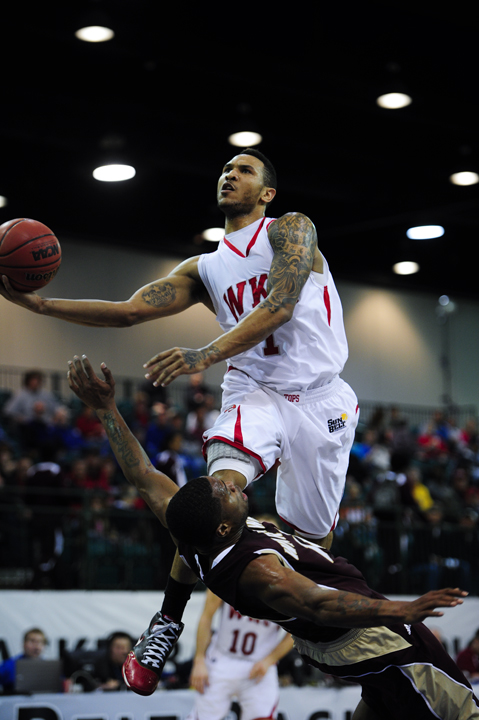 Senior forward Sergio Kerusch drives the ball to the basket but gets called for a charge against Louisiana-Monroe. Kerusch led WKU with 20 in the Toppers' 66-50 win.

HOT SPRINGS, Ark. — Head Coach Ken McDonald said he urged his team to keep its confidence and swagger despite shooting a meager 35 percent during the first half of Saturday’s game against Louisiana-Monroe.

Eventually, the shots started falling — at least more than the opposition’s did — and the Toppers lived to fight another day.

“I was pretty determined not to get too emotional at times, knowing we were playing good basketball,” McDonald said. “We were playing physical but not making shots.”

Although the Toppers never trailed during the second half, they struggled to pull away until they broke open what was a 54-50 game with just more than three minutes to play.

WKU held Monroe scoreless through that stretch, creating what McDonald said was a deceiving final score.

“If you just picked up the paper and didn’t see the game and saw a 16-point game, you’d get a totally different depiction of how the game went down,” McDonald said. “I thought Monroe really gave it the best shot right to the end, and I think our guys did a great job staying with the game plan, never really changing their body language and finishing the game.”

WKU next plays Louisiana-Lafayette, the No. 2 seed out of the Sun Belt West division, at 6:30 p.m. Sunday in Summit Arena. The Ragin’ Cajuns knocked off the Toppers, 67-64, in the teams’ only other meeting this season at the Canjundome.

Senior forward Steffphon Pettigrew said WKU will need another strong effort from its seniors on Sunday, who each scored in double figures against Monroe.

“Our body language was really good today,” Pettigrew said. “We had good composure and everybody stayed together.”

The Toppers shot just 41.5 percent for the game and were 0-for-11 from 3-point range until sophomore guard Caden Dickerson hit a triple with 9:32 to play in the game.

McDonald said it was part of WKU’s plan coming into the tournament to rely on senior leadership in close games.

“I think this time of year, when we’ve played all these teams once or maybe twice, we have to control what we can do, and you have to lean on the experience of the seniors and what they’ve been through,” he said.

The Toppers knotted up the score at 16-16 with 8:37 to play in the first half. Kerusch hit a layup to make it 18-16 the next time down the court, which proved to be the go-ahead basket.

Monroe never led or tied again, but WKU struggled to pull away in the second half. Before the 12-0 spurt to finish the game, the Toppers’ largest lead was eight points.

Monroe seemingly always had a response, at least until junior forward Fred Brown, who led the Warhawks in scoring at the time, fouled out of the game with more than five minutes to play.

Without Brown, McDonald said WKU was able to throw Monroe out of its rhythm while making hustle plays and grabbing rebounds down the stretch.

“We’ve put ourselves in a position to live another day, and that’s what it’s about,” McDonald said. “We’re going to try to take advantage of it tomorrow.”

WKU has reached the semifinal round of the Sun Belt tournament in each of the last six seasons. The winner of Sunday’s game between the Toppers and Ragin’ Cajuns earns a spot in the semis…Just 17 teams have ever won a conference tournament over a span of either four or five days as the Toppers will have to do in Hot Springs.