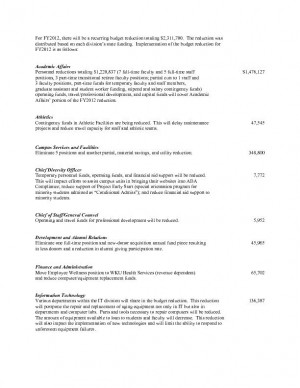 President Gary Ransdell made official the proposed $2.3 million budget cuts for the 2011-2012 fiscal year in an email on Friday to WKU faculty and staff.

Ransdell outlined the departmental cuts in an email attachment (download here) and said the effects would trickle down directly to students with higher tuition next year.

“At this point, we are identifying unavoidable cost increases in the context of a projected modest tuition rate increase for next fall,” he said in the email.

WKU’s Board of Regents raised tuition 5 percent for in-state students and 5.9 percent for out-of-state students in June 2010. As $5.4 million federal stimulus funds run out on June 30 — and state funding for WKU continuing to fall — Ransdell said tuition has to go up again.

He said WKU has suffered an 11.4 percent reduction in state funding since 2008, which totals more than $9 million.

Just how much WKU raises tuition for the 2011-2012 academic year will be determined this spring in conjunction with the Council on Postsecondary Education, Ransdell said.

“Our immediate challenge is how to most prudently reduce spending by $2.3 million while sustaining as little negative impact as possible on our faculty, staff, and students,” he said in the email. “Every division of the University will share these difficult reductions.”

Gordon Emslie, provost and vice president for Academic Affairs, has previously said that the $2.3 million in budget cuts won’t result in layoffs for faculty and staff.

Ransdell said on Friday that it’s up to department heads in choosing how to distribute the cuts “while sustaining as little negative impact as possible on our faculty, staff, and students.”

Consensus among WKU officials has been that cuts could have been worse when compared to how other universities recover from diminishing stimulus money.

“Some universities must decrease costs by so much that I don’t see how they’re still open,” said Ann Mead, vice president for Finance and Administration, in February.

Ransdell said much of the same in announcing WKU’s cuts on Friday.

“The global recession has affected all aspects of our local, regional, state, and national economies,” he said. “But as bad as it has impacted us at WKU, I must also acknowledge that our total impact over this period of time has not been as bad as most other states and many other public universities.”