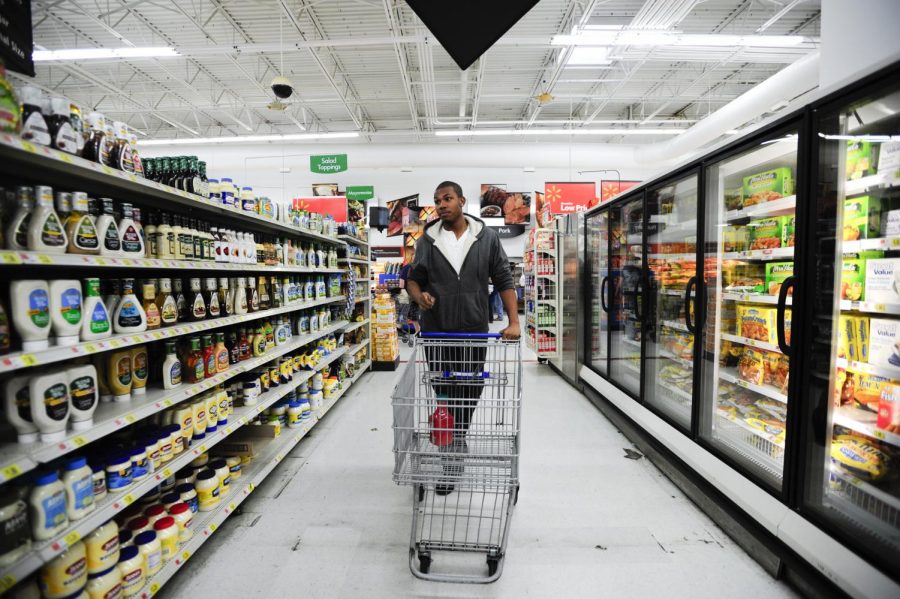 Cleveland junior Tony King shops at Walmart for juice on Friday afternoon. King, who has been participating in the Supplemental Nutrition Assistance Program (SNAP) since October, said he didn’t want to use it at first because he was embarrassed of being perceived as taking advantage of the system. Now King says he feels comfortable using SNAP to buy healthier foods and help ease the financial burden of school expenses.

Instead of choosing to scarf down unhealthy food, Cleveland junior Tony King thinks twice about what kind of groceries he buys.

King, like some other WKU students, takes part in the Supplemental Nutrition Assistance Program (SNAP), formerly known as the food stamp program.

Students who work 20 hours a week, participate in a work study program, take care of a small child or get public assistance benefits could be eligible for the program.

King, who works and pays for most of his college expenses, is able to buy organic, healthier food with SNAP money.

SNAP gives college students — or anyone else who participates — money to help put healthy food on the table, said Anya Weber, public information officer for Kentucky cabinet for health and family services in an email.

Weber said statistics aren’t available for how many college students use SNAP. But in 2010, more than 7,500 households in Warren County participated in the program, spending more than $2.2 million.

“Depending on the student’s household status, there may be work requirements to be eligible,” Weber said. “Eligibility also depends on whether he/she has a meal card that provides more than half of their meals.”

An applicant must be a U.S. citizen and be working, Weber said. The applicant also has to prove he or she doesn’t have more than $2,000 in cash and bank accounts assets.

King works as a community adviser at Pearce-Ford Tower, which is considered a work study program.

King’s mother is also a SNAP participant, and he has no health insurance.

“I think for college students, this program is good,” he said.

King applied for SNAP in 2010 and said he will stay in it as long as he can.

During the application process, the SNAP office gave him a $100 emergency funds while processing his application.

King said he usually spends all of his $200 monthly food allowance.

King usually shops at Walmart, but many other stores — including Walgreens and Kroger — accept SNAP money.

“I’m very natural and health conscious,” King said. “(Through SNAP) I’m able to save my money and eat wisely.”

“You can pretty much buy any kind of food with it,” Payne said. “There may be some exceptions with sugar.”

SNAP users pay with a card that looks like an other credit card, protecting the customer’s privacy, he said.

“It’s a program that’s designed to be a bit discrete,” Payne said.

King said the program affects his eating habits in a good way.

“Before when I had to use my own money, I would buy healthy and unhealthy food,” he said. “Now I try to get healthy food across the board.”

Although the program is meant to benefit people in need, Weber and King said people do take advantage of SNAP.

“I know sometimes people sell food stamps,” King said. “You do have those people who take advantage of the system.”

Lexington sophomore Christopher Jankowski has friends that ask him to buy items with his SNAP benefits, he said in an email.

“I do (buy for them. I’d do it even if I didn’t have SNAP benefits,” Jankowski said.

“I only make $200 every two weeks, so the SNAP program helps me get the things I need,” he said. “In fact, my boss in Housing and Residence Life encouraged me to apply.”

He also said it’s made his financial situation more stable because now he buys healthier foods instead of the cheaper, unhealthy alternatives.