McDonald, Cowles will return next season as WKU basketball coaches 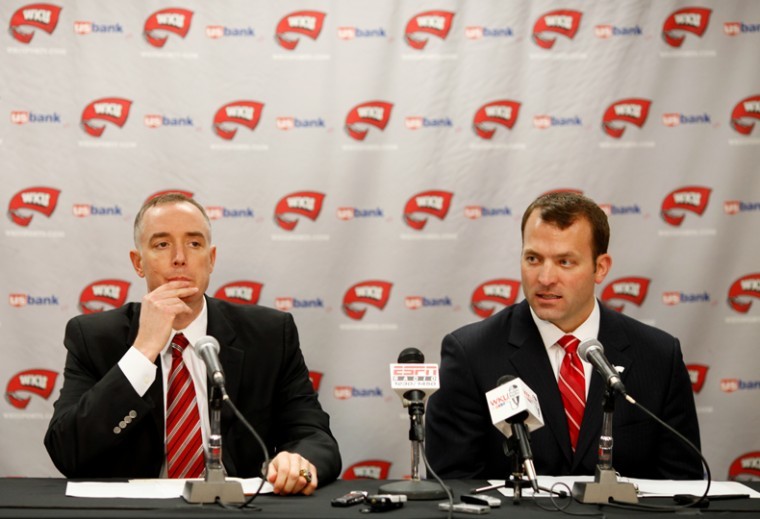 Bjork and McDonald were both made available to the media Monday in the Diddle Arena media room, where they discussed the achievements and pitfalls of McDonald’s staff over his first three seasons.

But Bjork said he’s ultimately confident in keeping McDonald in place, and that President Gary Ransdell is supportive of the decision.

“Ken has shown me a strong resolve and a laser focus — especially recently — and has been very proactive in identifying and admitting to mistakes that have been made under his watch,” Bjork said in an opening statement. “He recognizes that it’s imperative that his overall management style must improve, and we must end the negative trends.”

It was also announced that McDonald will now work under a revised four-year contract that runs through the 2014-2015 season. McDonald will take a $100,000 pay cut, returning him to his original base salary of $250,000.

Bjork said merit-based pay incentives are still in place in the new contract, and it will be brought up for approval at the next Board of Regents meeting.

WKU went 16-16 this season, recording the program’s most losses in more than a decade.

But McDonald has gone 62-38 in his three-year tenure, making him one of just five coaches hired in 2008 that have won 60 or more games since.

His 62 wins are also second behind only John Oldham for most victories by a WKU basketball coach in his first three years.

But despite those numbers, McDonald said he feels pressure to “hit the reset button.”

“When something isn’t at the level you want it, you have to pick it up,” McDonald said. “I’m looking at myself first and making sure our staff is in line with me, making sure I set a tone and making sure the players follow it. What has gone on right now … is not acceptable.

“It’s our job to make sure we’re getting back on track.”

Look for extended coverage of McDonald’s status in Tuesday’s Herald.

Bjork said the Lady Toppers have “lots of work to do” after a season that ended with a 15-17 record — Cowles’ first losing record during her tenure.

WKU rebounded from a rough start to the season with a trip to the finals of the Sun Belt Conference Tournament last week, where they lost to Arkansas-Little Rock, 66-59.

Todd Stewart, senior associate athletic director, said Monday that Bjork and his staff are currently evaluating everthing within the Lady Topper program, from day-to-day operations to recruiting to staff.

Bjork completes a similar review of every WKU coach and program when their season is over, and Stewart said the goal of each evaluation is improvement.

“We’re looking at any and every means to improve on a 15-17 record that was obviously disappointing,” Stewart said.

WKU has not yet commented on any alterations, including personnel changes, that might happen inside the program.