Lions, tigers and elephants in Diddle, oh my 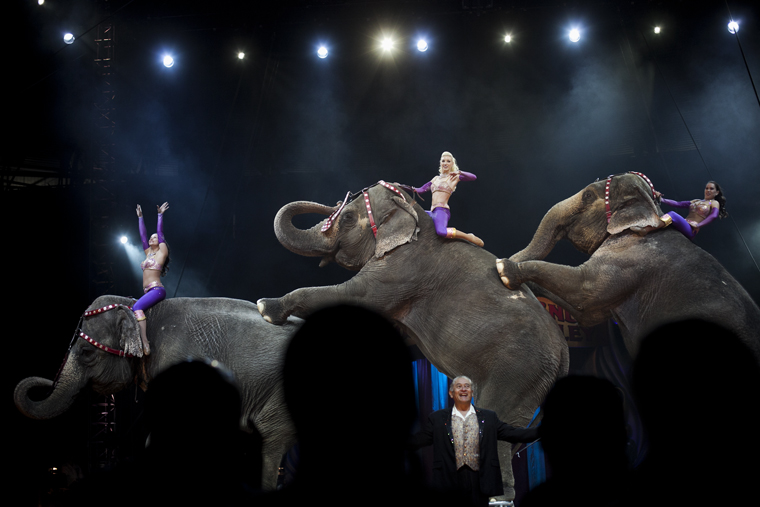 Elephants perform during the last act of Friday's circus at Diddle Arena. The Ringling Bros. and Barnum & Bailey Circus came to WKU for a three-day run. The show featured multiple animals, including lions and elephants.

Children and adults of all ages oohed and ahhed from Friday evening to Sunday afternoon during the two-hour performances, and several WKU students walked out of the arena feeling like kids again.

Along with the animals, the show included clowns, acrobats, motorcycle stunts and trapeze acts.

Courtney Marx, a freshman from Cooper City, Fla., said it was her first time going to the circus.

“It completely exceeded my expectations,” she said. “I was jumping and screaming.”

Marx went with Independence sophomore Jordan Vorst, who said he didn’t really know what to expect either since he hadn’t been to the circus since he was 7.

A friend told them they had to see the show, especially the motorcyclists who performed inside a cage.

The acrobats were a big hit for Vorst.

“A lot of it just blew my mind,” he said. “My mouth was wide open the whole time.”

The behind-the-scenes action was just as mind boggling as the show for friends Steven Poland and Kevin Preston.

Before the show, the two ROTC members had their first circus experience when they worked security for the animals.

“We got trapped while they were bringing in the elephants,” said Poland, a junior from Tampa, Fla.

Preston, a junior from Hazlet, NJ, said it was weird to look down in a bathroom stall and see clown shoes next door.

Both said they had high expectations, and the show didn’t disappoint.

Poland said seeing the lions was “crazy” because they were so massive.

Preston thought the same about the elephant stunts.

“You see them on Animal Planet, and then they’re like right here in your face,” he said.

The circus was more than just entertaining for him – he said it was a break from the college grind.

“I didn’t have to worry about college classes,” he said. “It takes you back to a time when it was simpler.”

Vorst remembered when he dreamt of being in the circus as a kid because of all the jumping around and flipping.

“It would have been great, even though I was afraid of heights,” he said. “But I know my mother never would have let me.”