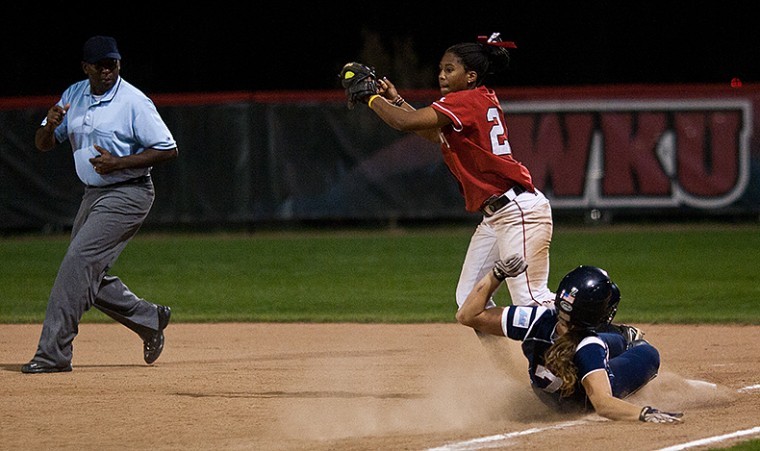 WKU freshman infielder Kelsie Mattox catches the ball for the out as Belmont's senior pitcher Julie Harmon slides into first base during the second game of the doubleheader. The Lady Tops won the second game, 9-1.

The Lady Toppers (17-11, 0-3 Sun Belt) took their first game of a home doubleheader against Belmont, 3-1, before winning the second, 9-1, at the WKU Softball Complex.

Although WKU does not have an undefeated record on the season, it does against Belmont (7-16) for the past 11 years.

“You always want to keep a positive streak like that going,” Perry said. “Right now, we are playing ourselves a bit, but it was good to see ourselves figure some things out and be a little more aggressive.”

The Lady Toppers scored 12 runs and recorded 11 RBIs with no errors combined during the two games.

In the first game, down 1-0, sophomore catcher Karavin Dew hit a triple deep into right field for the Lady Toppers. She then scored after a wild pitch was thrown, tying the game.

Dew repeated the performance once again in the bottom of the sixth inning, when her hit to right field brought in two runners to take the lead, 3-1, over the Bruins.

The sophomore finished the night with two runs and three RBIs.

“I was feeling good,” Dew said. “I was wanting to get some wins, especially after this weekend, we wanted to play our game. There is nothing to lose. Let’s just play.”

In game two, it was scoreless until the bottom of the third inning when the Lady Toppers added six runs.

Junior Amanda Walden helped the Lady Toppers pull away with a home run over the left-field wall, which also brought in two runners.

“I was struggling early hitting, and it felt good to get a big hit and hit it solid for once,” Walden said.

The doubleheader wins come after a rough last weekend that included three losses at South Alabama, where WKU was out-scored 36-4.

To Perry, the wins couldn’t have come at a better time for WKU.

“It was imperative that we showed maturity and grow,” Perry said. “If you have weekends like you do at South like we did, if you learn from them and grow from them, it is going to be okay.”

The Lady Toppers hope to continue improving when they host Florida Atlantic in a three-game series at home this weekend.

“We just have to go out and play ball,” Perry said. “Our conference is in a dogfight right now. There is a lot of people winning one weekend and losing one weekend.

“Everytime we go out, we have to play hard. If we play Western Kentucky softball, then we will be okay.”