Tops getting on board with OC Azzanni’s new style 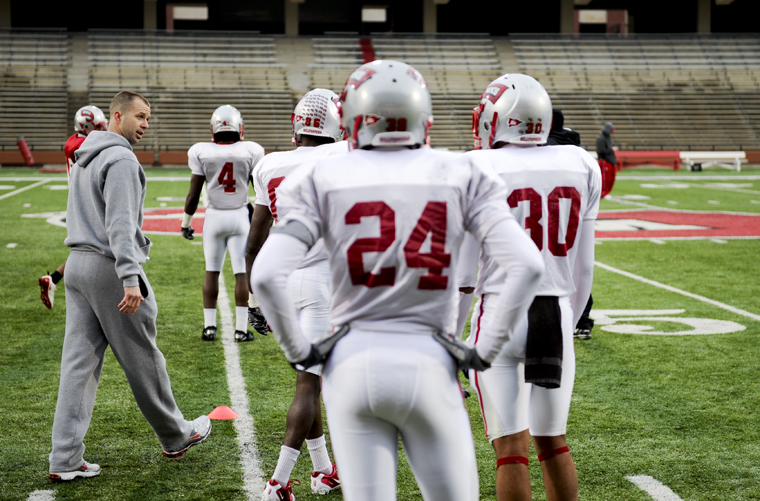 The team can either get on board or get off.

A blunt demand like that could bring negative results, but not right now. WKU senior offensive tackle Wes Jeffries said he and the other players are buying into what “Coach Z” is asking.

“Our new offensive coordinator — we call him Coach Z — has brought a new character for us,” Jeffries said. “Everything we do is all mental. You either do or you don’t.”

He was hired after former quarterbacks coach Mike Sanford left for Stanford on Feb. 16 to become the running backs coach.

But junior quarterback Kawaun Jakes said the transition is bringing positive reactions from the offense, both on and off the field.

“He is a good dude,” Jakes said of Azzanni. “He is getting everybody in tune. The receivers are wanting to learn routes, and they are staying out there working. The O-line is into it.”

Because WKU’s last spring was about learning the new West Coast offense, this year has been about mastering it. And that’s where Azzanni comes in.

“He knew coming in that we were going to run our offense, but we wanted to enhance it,” Head Coach Willie Taggart said. “I’m all for new suggestions and doing things new ways, but one thing I didn’t want is for our guys to have a lot of new learning.”

Azzanni said one way the team can improve is by working on its passing game.

They were also last in pass completions with 151.

“We’ve got a bunch of willing and eager guys right now,” Azzanni said. “That’s why I was excited to take this job. I knew these guys were going to be hungry and want to win.

“I like to coach kids that have a hard edge and have a chip on their shoulder. I want to be in a place where all of a sudden, a bunch of people are jumping on your bandwagon.”

He has brought with him a drill called the “Circle of Trust,” in which he records those loafing around or playing soft throughout each practice. Each time he sees something he doesn’t like, it results in one up-down drill later for the player.

As painful as the drills can be, Jeffries said Azzanni’s methods are making the Toppers better.

“I think guys like him a lot,” Jeffries said. “I really do. He puts a lot of responsibility on the players. Every day he goes through, watches practice and does ‘loafs and softs,’ and for every loaf and soft, that’s one.

“It adds up, trust me. No one likes doing them, but it makes you work harder.”