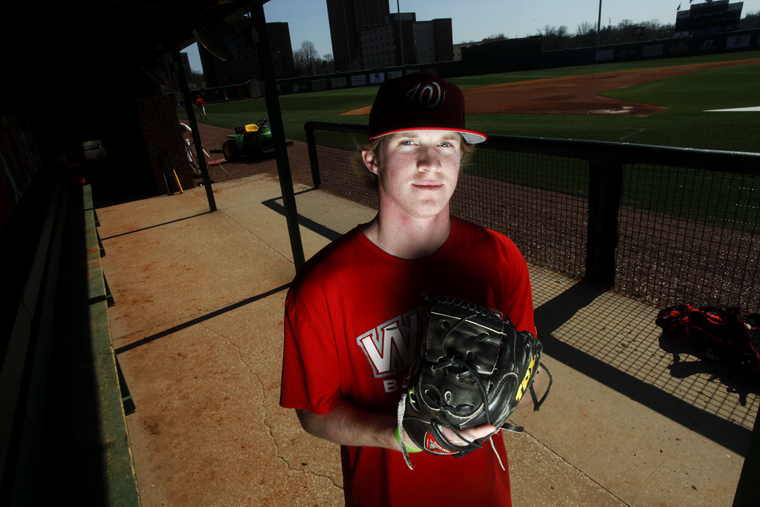 Sophomore pitcher Tanner Perkins has stepped into the role of WKU's No. 1 pitcher this season. Perkins, who first bonded with WKU pitching coach Matt Myers while fishing on a recruiting visit, is 3-1 this year as the Toppers' Friday night starter.

But when Myers went fishing with a Rockcastle County left-hander named Tanner Perkins in 2008, he caught more than just a fish.

He caught the Toppers’ future ace.

Myers was making an in-home visit with Perkins, then the top-rated pitching prospect in the state of Kentucky.

Myers knew Perkins liked to fish, so he suggested they both go out to the pond on Perkins’ property.

He said his early relationship with Myers was the biggest factor in coming to WKU.

“Having a personal relationship with the main guy that was going to be coaching me really made me feel like this place was home,” Perkins said.

Now in his sophomore season, Perkins has established himself as the Toppers’ Friday night starter.

He’s 3-1 with 2.84 ERA this season and is coming off his best start, a complete game 3-1 victory over Illinois last Friday.

Perkins allowed just one run and retired 21 straight Illinois batters at one point.

His performance came on the heels of his only rough appearance, a loss to the College of Charleston in which he surrendered seven runs in just over four innings of work.

“He bounced back from his start that wasn’t good with his best one of the year,” Finwood said. “The key for a Friday guy, as much as stuff, is mentality. And Tanner’s a tough-minded guy.”

Myers said he knew when watching Perkins in high school that he had the leadership abilities and physical skills needed to perform well in college.

Myers also said he could tell Perkins was “raised right” because of his solid grades and humility during the recruiting process.

“He had tremendous leadership skills,” Myers said. “All the kids just gravitated towards him. And he threw the heck out of the ball and had three good pitches.

“I knew if we could just clean him up a little bit on the delivery, he had a chance to be pretty good.”

He worked mostly in a weekend rotation that included two seniors, Shane Cameron and Matt Ridings.

“I knew my job was going to be to take the ball on that Friday night start,” Perkins said. “It was going to be up to me to make the first game of the series a Tops win.”

Perkins will go for his fourth win of the season Friday when WKU takes on Middle Tennessee at Nick Denes Field at 6 p.m. in the first game of a three-game series.

Myers said he wants Perkins to continue developing the talent and leadership that first brought him to Perkins’ pond years ago.

“I told Tanner he’s not a freshman anymore, and it’s time for him to lead by action,” Myers said. “So far he’s been outstanding.”