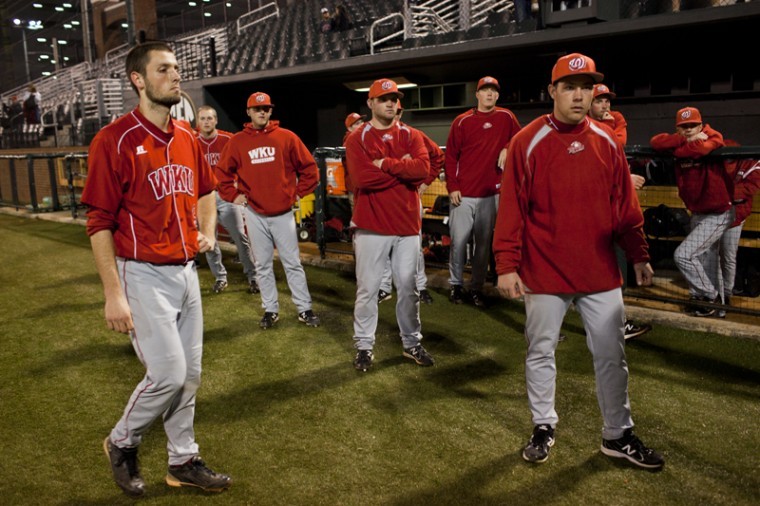 NASHVILLE — WKU was one pitch away from a victory over the nation’s No. 2 team.

But thanks to a controversial walk and a subsequent wild pitch, the Toppers (5-3) fell to Vanderbilt, 6-5, on Tuesday afternoon at Hawkins Field.

Kemp worked the count to 3-2, then took a fastball that home plate umpire Jordan Ferrell ruled a ball, forcing in the tying run.

Senior catcher Matt Rice threw down his helmet in disagreement with the call and was ejected by Ferrell.

WKU Head Coach Chris Finwood then came out to argue what he said he thought should’ve been strike three.

Following the ejection of Rice, sophomore J.P. Jackson entered the game at catcher.

Pitching to the next Vandy batter, Mike Yastrzemski, with a 1-0 count, Davis threw a ball in the dirt that Jackson couldn’t scoop up.

The ball dribbled along the first base line, allowing Commodore pinch runner Sonny Gray to score the winning run.

The controversial loss overshadowed a four-run comeback by WKU.

Edelen, who didn’t factor in the decision, pitched three innings and gave up four runs in his second start of the season.

But the Toppers tallied five runs in the fourth inning to turn a 4-0 deficit into a 5-4 lead.

Relievers G.J. Strauss, Ross Hammonds, Phil Wetherell, and Davis, who took the loss, then shut out the Commodores for the next 5 and 2/3 innings.

Hammonds pitched 3 and 1/3 of those innings, giving up just two hits and a walk.

“Ross does a really good job in that role,” Finwood said. “He throws the ball in the strike zone, mixes his pitches up and keeps it down.”

While the Topper bullpen pitched well, the Vanderbilt bullpen was just as dominant.

Moore and Ziomek, both considered by scouts to be future high-round MLB Draft picks, were among several possible future pros that saw the field for Vanderbilt Tuesday.

Finwood said he was encouraged that WKU was able to take the nation’s second-best team down to the last pitch in the midst of a 10-game road trip.

“This whole stretch of our schedule is about toughening us up,” Finwood said. “We’re playing an awful lot of ranked teams on the road, so this is about us understanding that we can beat anybody we want to if we play well. I think we proved that tonight.”

Coming up next for the Toppers will be a trip to Charleston, S.C., for the College of Charleston Tournament.

WKU will face host College of Charleston at 4 p.m. Friday.

Left-handed sophomore Tanner Perkins is expected to start for the Toppers.

WKU and Vanderbilt will meet again on April 26 at Nick Denes Field.