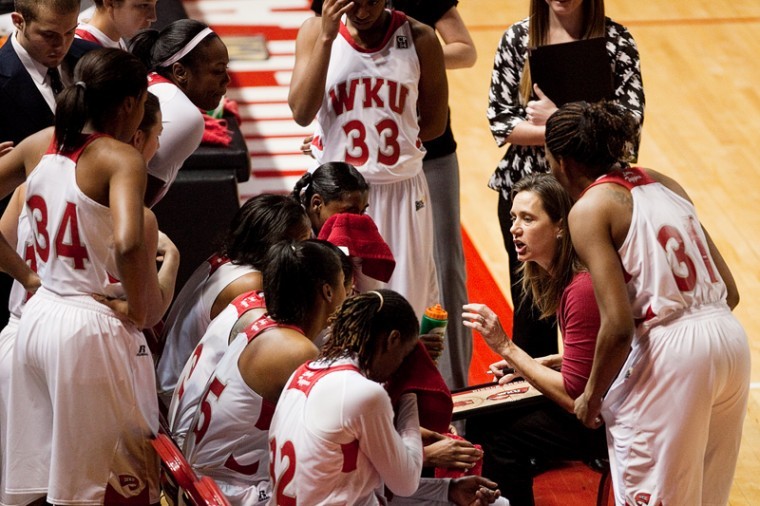 The Lady Toppers face North Texas at noon Saturday in the first round of the Sun Belt Conference Tournament in Hot Springs, Ark. WKU says it will view this weekend's tournament as "a new season."

If history means anything, the Lady Toppers couldn’t have asked for a better first-round opponent in this weekend’s Sun Belt Conference Tournament in Hot Springs, Ark.

The past two times the Lady Toppers (12-16, 9-7 Sun Belt Conference) have won the conference tournament – 2003 and 2008 – they started their championship runs with first-round wins over North Texas.

But Head Coach Mary Taylor Cowles didn’t even begin to entertain the idea that those games had any relevance to WKU’s meeting with North Texas at noon on Saturday.

“That’s nice for those who want to think about it, but I don’t believe in omens,” she said. “I believe in hard work, and I believe in focusing for 40 minutes or more. I believe in having to walk out with the right attitude and the right mindset and earning it game by game.”

Saturday’s game will mark the official start of the tournament.

It’s the second meeting of the season between the two teams, and the fourth time they’ve met in the Sun Belt tournament. The Lady Toppers won 69-64 on Jan. 8 at Diddle Arena and hold a 2-1 advantage over North Texas in postseason play.

Despite North Texas’ 5-24 record, Cowles said it’s still a team that can give the Lady Toppers problems, as she said was evidenced by their slim margin of victory at home earlier in the season.

But now the Lady Toppers won’t be in the comfort of Diddle and will have to win at the Summit Arena, where they are currently winless.

Senior guard Amy McNear said it’s North Texas’ athleticism that will cause problems for them.

“They like to drive the ball a lot,” she said. “Their post play is very good. We have to go into this game focused on defense, rotation and help-side (defense) because they are a good basketball team.”

The Lady Toppers have another tough task ahead of them, but one they built themselves.

They had a chance to clinch a No. 2 seed and a first-round bye with a win over Florida International on Senior Night, but lost 75-62 and forfeited the seed and bye to FIU.

Now, instead of having to win just three games in three days to win the tournament, the Lady Toppers will now have to win four games in four days – a situation they’ve been in just two other times in the past 28 years.

Senior forward Arnika Brown said that’s not something the players are worrying about.

“We just have to keep the faith in knowing that it can be done and it has been done,” she said. “Once the ball goes up, we have to stay focused for 40 minutes or however long it takes to win a ballgame.”

The Lady Toppers haven’t won more than two games in a row all season. So to prevent the players from getting overwhelmed by the idea of having to win four games in four days, Cowles said they’re entering the tournament as if it were a new season and are “taking it one game at a time.”

“I think that’s the most positive approach that we can take,” she said. “With the way the conference has played itself out this year, I think it’s a year where, ‘Who wants it?’ Who wants to step up and grab this championship?

“When you lose, you’re done at this point in the year. So we’re not really concentrated on the fact that it’s going to take four. We’re going to Hot Springs and we’re going to win basketball games.”