McDonald: Toppers have to limit distractions 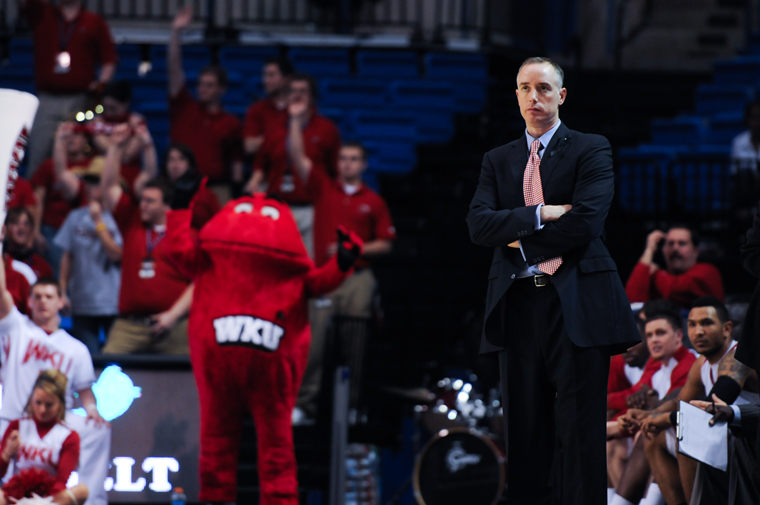 At a press conference to announce that McDonald will remain in charge of the men’s basketball program, the coach spoke at length about distractions created by him and WKU players during his first three years.

McDonald, who addressed a crowd in the Diddle Arena media room with Athletics Director Ross Bjork at his side, apologized for any “personal or professional decisions” that have served as distractions since he was hired in 2008.

McDonald said part of starting anew with Bjork and WKU is taking a long look in the mirror, which led him to address parts of his personal life that he has never before discussed on record.

He talked about dealing with a divorce over the past two years, as well as trying to maintain a long-distance relationship with his 3-year-old daughter, who now lives in Texas.

“There were times I’d try to talk myself into saying that it would be OK, and I could handle it,” McDonald said. “You always try to act tough. It’s not the people that know you that you worry about. It’s the people that don’t know me – and understandably so – that are quick to judge or look at you with a different eye, and that’s tough.

“You want to be liked and thought of in a high regard, and it all snowballs once you start doing bad.”

WKU’s 16-16 record this season didn’t help matters, nor did issues surrounding three players on the team.

Junior guard Ken Brown and senior forward Cliff Dixon were dismissed during the year for violations of academic policy and team rules, respectively, while freshman guard Brandon Peters was ruled academically ineligible because of grades on Jan. 1.

Peters is still with the team, but 10 players have been dismissed from or quit the program during McDonald’s three seasons.

Bjork said he’s put an emphasis during talks with McDonald on recruiting the right type of players to WKU, which includes more four-year players.

“It’s a factor for sure when you retain a staff because you want the best program possible,” Bjork said. “The recruiting class coming in is high-level. It’s energized, and it has formed a unique bond. “

Bjork said the academic advisors in the athletics department have designed a new academic retention program to make sure situations like Peters’ don’t happen again.

McDonald also said the coaches have begun trying to build stronger bonds with the players they recruit so they “know what they’re getting.”

With several fresh faces coming to campus next year, Assistant Coach Ray Harper said the opportunity exists to repair WKU’s image in the eyes of fans.

“We know where we’ve made mistakes, and we want to move forward,” Harper said. “You wouldn’t want to be somewhere where they didn’t care, and there’s no question they care here.”

And although he had to sit center-stage and take the heat Monday, he said he’s looking forward to a clean slate.

“We’re going to take advantage of the opportunity to keep the support of the people we have and to regain the support of the people we’ve lost over the past year or two,” McDonald said. “I know the product on the floor is going to be a whole lot more fun to watch and relate with because I know the character level of the guys returning and coming in.”