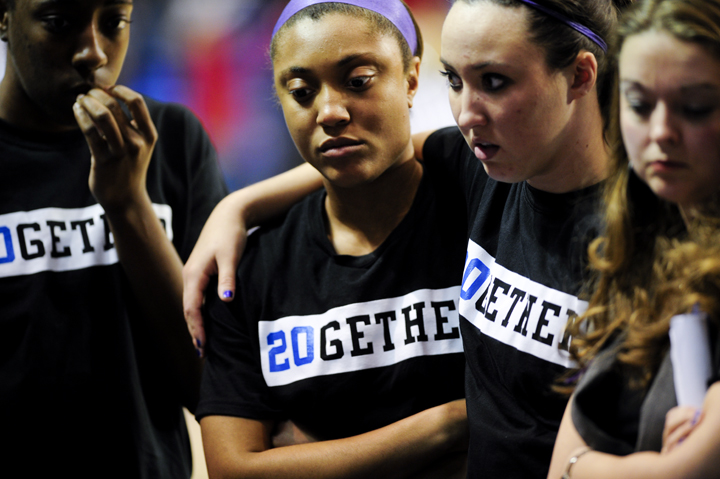 “Everyone knows what we have been through, and emotionally it has been tough,” said MTSU guard Anne Marie Lanning. “We just went out there and played for T and gave it our all. I just know that she would be proud of us.”

MTSU lost the game, 77-62, and ended an eight-year stretch that saw the Lady Raiders go to the Sun Belt tournament championship game every season. Arkansas State advances to play WKU in the tournament’s semifinals.

The Lady Raiders wore black shirts before the game with “20gether” on the front and “Stewart” on the back. That’s in addition to a patch on their jerseys.

Various MTSU and league officials are also wearing the “20gether” logo on their shirts today.

Lady Raiders coach Rick Insell said he was forced to coach differently under the circumstances, even in substituting. Stewart was regularly the first player off the MTSU bench.

“I just felt so much for them and what they are going through,” Insell said. “I am a grown person, and they are just young adults. It is hard to jump in one of their faces after the last four or five days.

“I am proud of my team. There will be some good things happen to this bunch.”

The Lady Raiders, who earned a first-round bye and were the East division’s No. 1 seed, debated whether to even play in the tournament.

They did and showed up with purple ribbons in their hair. Purple was Stewart’s favorite color, according to a school official.

Arkansas State coach Brian Boyer took a timeout with less than 30 seconds left in Sunday’s game to tell his team not to celebrate until it got to the locker room “out of respect for Middle.”

Many at the tournament this weekend have been wearing black ribbons on their shirts and jackets in honor of Stewart.

Before the Lady Toppers’ game against North Texas on Saturday — the first of the tournament — the league observed a moment of silence in honor of Stewart.