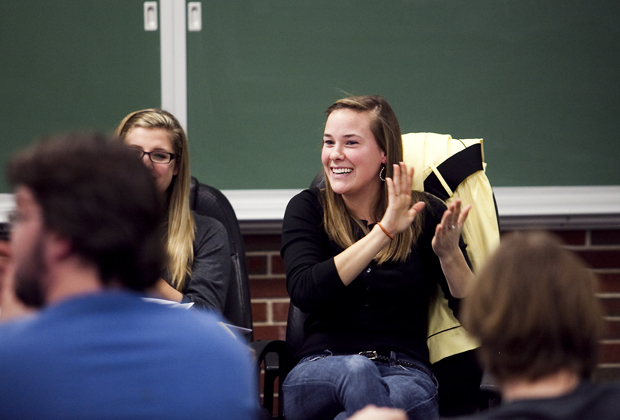 Kaylee Egerer, Campus Improvements Chair, celebrates after Resolution 2-11-S, the legislation supporting a DUC renovation Project, was approved during Tuesday's SGA meeting. The new bill calls for a maximum student fee of $70 a semester for students until the project is paid off.

Tuesday’s meeting marked the second reading of the bill, which was originally introduced to the SGA last semester and read for the first time on Feb. 15.

“I’m glad we took the time to the time that we did to do this,” said SGA President Colton Jessie. “Every step we took was extremely important. Gathering student input was the most important step we took.”

Project costs for the renovations have been capped at $49,128,545, and the resolution calls for an additional student fee of up to $70 per semester for 20 years.

WKU will pay $1.5 million to the project per year. The resolution estimates that $2,188,000 will be generated from the student fee.

“Even though we just passed one, there’s never a good time to talk about student fees,” Jessie said. “I see it as an investment though. It’s an important building.”

Ross Tarrant Architects and Mackey Mitchell Architects will design and complete the project.

Jeff Stivers, head architect for the project, said after Tuesday’s meeting that he was “relieved” because now the project can move ahead.

“I wasn’t really nervous from that perspective, but it’s been something that we’ve talked about for so long,” Stivers said. “This was the highest hurdle that was still on the board that we wanted to get past in order for the project to go forward, and now that’s behind us.

“There are some other approvals that still need to take place, but they all hinged on this one.”

The resolution calls for construction to begin as soon as possible “because interest rates are low, and because it will only get more expensive the longer this project is put off.”

Charley Pride, director of Student Activities and Organizations, said he hopes official plans for the project will be presented at the Board of Regents Committee meeting on April 1 before the April 22 Board of Regents meeting.

Pride said SGA will form what he calls a “general committee” before blueprints are made for DUC renovations.

“They’ll be the ones who decide what goes in the building and where,” he said.

Campus Improvements Chair Kaylee Egerer — also the author of the resolution — said in Tuesday’s Herald that renovations will begin this fall at the latest and possibly as early as May.

SGA asked for assurance of a 24-hour study space in the latest draft of the resolution and “will cater to as many of the students’ realistic requests as applicable, and as the budget allows.”

Architects can set up a stand in DUC for students to vote on project specifics before they start blueprints, according to the resolution.