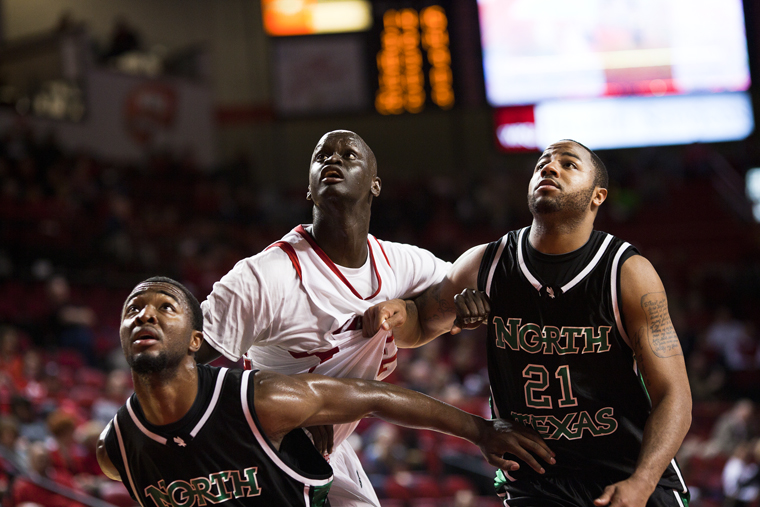 Sophomore center Teeng Akol fights North Texas players for a rebound in the second half of their ESPN2 game Saturday afternoon in Diddle Arena. Akol had a career-high nine points and six rebounds against the Mean Green.

Plenty of people have claimed to be a fan of sophomore center Teeng Akol’s potential, including senior forward Steffphon Pettigrew and WKU legend Jim McDaniels.

But over the last week, Akol’s results on the court have made him a crowd favorite.

And for every play Akol made in both games, the Diddle Arena crowd provided approving applause.

“It’s amazing. The fans love him already,” Head Coach Ken McDonald said. “It’s one of those things, and that can have a snowball effect on the team and the fan base. I’m really happy for him. He’s stayed working, and he’s a great kid.”

Akol, an Oklahoma State transfer, debuted for WKU on Dec. 18 against Murray State but failed to make much of an impact until last Thursday’s game against MTSU.

After playing a combined 29 minutes in his first eight games of action, Akol played 37 minutes in WKU’s next three games and led the team in blocks in each of those contests.

“It was kind of like when you just feel it, and then you’ve got to go do it,” Akol said. “The first game was a long time coming, but right now, I’ve started feeling it. It’s coming back.”

Although McDonald said one of Akol’s greatest strengths is his length and ability to alter shots, the sophomore displayed some offensive skills against the Mean Green Saturday, knocking down two jumpers and adding a dunk.

“He’s a difference maker,” McDonald said. “He’s tough to get around in the post, he can score the basketball, he’s a good passer, and he’s so long. I’m excited about what he brings to the table right now and also happy for him.

“He’s worked hard and put himself in this position.”

When asked Saturday by the media what’s led to his breakout, Akol dropped the phrase “work hard” five times, which drew smiles from his roommate Pettigrew.

“He’s been a big part,” Pettigrew said. “These past couple games, he’s clogged up that paint. He’s messing up people’s shots, and he’s a big part to this team. He’s my roommate, and I tell him to just keep playing and keep blocking shots and working hard.”

And McDonald said hard work is exactly what’s paid off for Akol.

“He’s another guy that it’s been a struggle for him because of the close games we’re in,” McDonald said. “If he gets in that game and makes a mistake, and it’s a close game, it’s hard to leave him in. But he’s gone in and taken advantage of the opportunity the last couple weeks, and I’m really excited for him.”

WKU fans have been excited for Akol too. He received a large ovation every time he entered and left the game Saturday, and he flashed a grin when asked about becoming a fan favorite.

But even then, the big man went back to his blue-collar mantra.

“That’s pretty good,” he said. “The fans seem to love me, but I’m going to just keep working hard and do whatever coach tells me to do.”