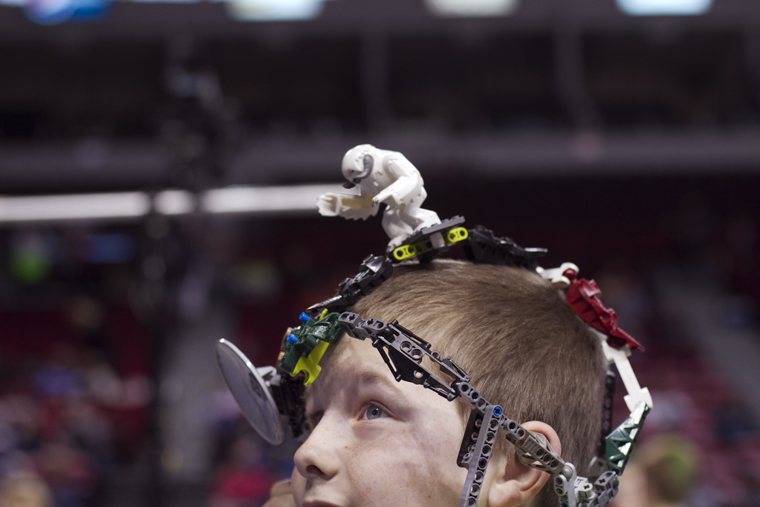 A member of the Ingenious Engineers team watches two of his teammates compete during an afternoon round of the Kentucky FIRST LEGO League State Robotics competition. Students ages 9 to 14 competed, using student-built and programmed robots to execute tasks related to this year’s theme, “Body Forward.”

These names might seem strange without context, but on Saturday, they were the names of some of the teams who competed in the Kentucky FIRST LEGO League State Robotics Championship.

The event brought 400 students from all across Kentucky to Diddle Arena and Downing University Center and was sponsored by WKU’s science and math departments, according to program materials.

Curtlyn Kramer, a volunteer from Ashland, said this year’s theme for the competition was “Body Forward,” which gave the students an opportunity to brainstorm a solution for a problem in the field of biomechanical engineering.

“This goal might be to fight obesity, help the cardiovascular system or help set bones,” she said.

This year, students picked problems ranging from how to apply prosthetic limbs to how to increase battery life on cochlear implants.

During judging, each team had to show that their robot could perform a task, such as pushing a mechanical lever to make an arm grasp, getting a syringe to lunge forward or replicating the process of setting a limb.

The students, who ranged in age from 9 to 14, were given the theme in early September and had been working on their robots since then, said John Inman, the event’s organizer.

The robots were made out of LEGOs and used a NXT LEGO motor and a computer software program called “Mindstorms,” said Logan Daniels, a seventh grader from Twenhofel Middle School in Independence.

The process of programming the robots included taking measurements, trial and error, and programming motors and sensors, said Colten Smith, an eighth grader from Hancock County Middle School in Lewisport.

Inman, who began his involvement in the program as a volunteer six years ago in order to support his son, said, “the greatest benefit of the event is that it helps young people get excited about the ‘STEM’ subjects (science, technology, engineering and mathematics).”

Inman said another important focus of the program was to expose the students to WKU’s campus.

“We want the brightest young minds in Kentucky to see what we have and the programs we have,” he said.

While the competition was a lot of hard work for students, they also have plenty of fun, Inman said.

“It’s basically like a sporting event for science,” he said.

The winner of Saturday’s event advanced to the world festival in St. Louis in April, Inman said.