Canceling classes for snow up to provost 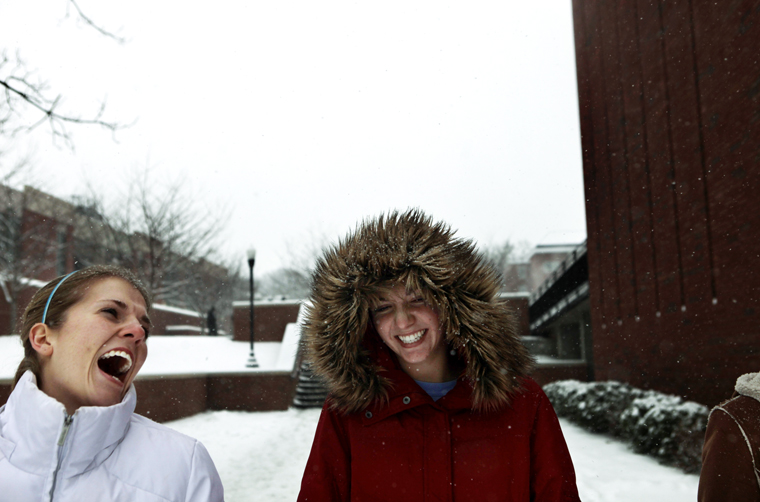 Louisville junior Lauren Snider and her friend Franklin sophomore Haley Mefford walk to the Preston Center Wednesday afternoon after classes were let out due to the snow.

More than 10 people liked Bowling Green junior Josh Amos’ Facebook status Wednesday night posted in response to an e-mail from Bob Skipper, director of media relations, that class would be starting at 12:45 p.m. on Thursday.

“And Bob Skipper has spoken. Thank you Bob,” the status read.

Even though it’s Skipper who relays the message, the decision to cancel class is ultimately up to Gordon Emslie, provost and vice president for Academic Affairs, who began his job on July 1 of last year.

“We communicate the decision as soon as we get it, and that’s the best we can do,” Skipper said. “There are a lot of factors that come into play in making the decision to close or cancel classes. It’s not a simple or easy decision to make.”

Amos said he had no idea — and doubted other students did too — that canceling classes is up to Emslie.

“I thought it was all Bob Skipper who did that,” he said. “I didn’t even know if Bob Skipper was a real person because of the name, you know?”

It’s safe to say Emslie hasn’t had the kindest of winters as his first on the Hill. Class has been canceled four different times on WKU’s main campus during the 2010-2011 school year: morning classes on Dec. 14, night classes on Monday and Wednesday, and morning classes on Thursday.

A single-day record 3.8 inches of snow fell on Wednesday, eclipsing the 3.1 inches that blanketed Bowling Green on Feb. 9, 2010, according to the National Weather Service.

Emslie was out of the office on Thursday for meetings in Frankfort and unavailable for comment in this story. It’s assumed a university provost will be busy, and that’s why Deborah Wilkins, chief of staff and general counsel, said she and other school officials always keep Emslie up to date on weather as it happens.

“He makes a pretty informed decision once he makes it,” Wilkins said.

As for WKU’s campuses in Owensboro, Hardin County and Glasgow, Wilkins said it’s up to individual directors at those locations to close campus.

In the future, Amos said he would like to see a decision made about WKU’s Bowling Green campuses just as quickly as one is made at regional campuses.

“I think they should do it faster,” he said. “We got all the notifications for the Glasgow campus and E-Town campus and stuff like that first.”

Wilkins said the decision is sometimes delayed because when canceling classes on campus, officials also have to keep in mind the students who live there. All dining areas closed on Wednesday by 7 p.m., with most shutting down before that.

And as for the thought that it takes an injury to a student to have class canceled, Wilkins said that’s not the case.

“We have so many elderly trees, and a limb could fall out of them at any time. Plus we have a lot of fat squirrels,” she said, laughing.