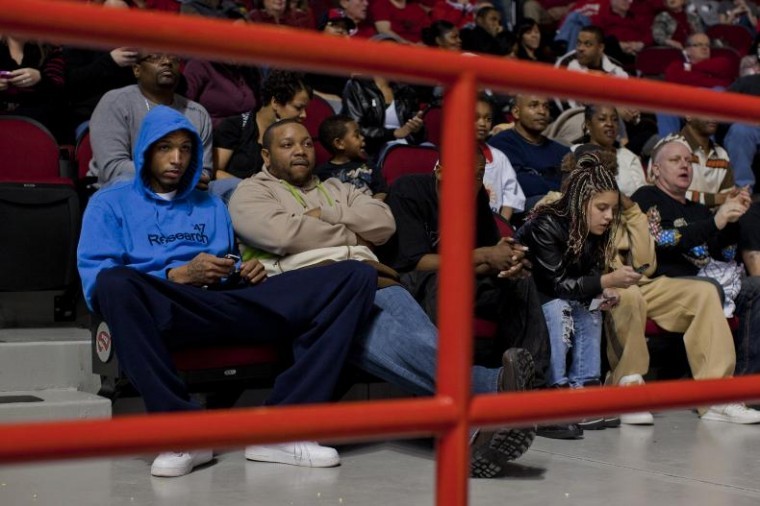 Senior forward Cliff Dixon sits in the stands during the second half of WKU's game against North Texas on Saturday. Dixon didn't play in the first half and didn't join the Toppers after halftime, and WKU announced Sunday that the senior has been dismissed from the team for a violation of team rules.

Head Coach Ken McDonald said issues regarding Cliff Dixon are being handled “internally” after the senior forward didn’t join WKU on the bench for the second half of Saturday’s game against North Texas.

Dixon didn’t play in the first half against the Mean Green and was absent from the bench when the Toppers returned from halftime.

He was later seen sitting in the stands in street clothes for a portion of the second half.

“It’s an internal matter right now, and we’ll probably have more on that in the next couple days,” McDonald said. “We have to handle that as a coaching staff and as a team internally.”

McDonald said Dixon is still with the team, but that he and the coaching staff have “some talking to do.”

Saturday was a big day for WKU basketball, including the presence of ESPN cameras.

The game was broadcast on ESPN2, and senior forward Steffphon Pettigrew said the Toppers made a good impression.

“At times, I forgot that we were on ESPN,” he said. “People around the league see the potential that this team has, and we just need to be consistent and keep it going.”

WKU also welcomed its 1971 Final Four team, which was honored during halftime. The group also spoke to the current Toppers before the game.

“We had an incredible weekend with our ’71 team here,” McDonald said. “I think our guys were very, very excited about not only the ESPN game, but also a chance to hear from that ’71 team and what it means to be a Hilltopper. A lot of those things went into a great night.”

McDonald said it was evident that the extracurricular events at Saturday’s game boosted WKU’s energy, and he joked that keeping that momentum is a simple fix.

“We’re going to talk to (Athletics Director) Ross Bjork about bringing the ’71 team in every game and have a chance to hear from them and get excited,” McDonald said. “And ESPN — we’re going to call ESPN.”

Akol continues to break out

Sophomore center Teeng Akol won over the Diddle Arena crowd in Thursday’s loss to Middle Tennessee with four blocks, but he made an even greater impact Saturday.

Akol recorded career highs with nine points and six rebounds against North Texas, and he said things have started to come easier as he’s gained confidence.

“It was kind of like when you just feel it, and then you’ve got to go do it,” Akol said. “The first game was a long time coming, but right now, I’ve started feeling it. It’s coming back.”

McDonald said the way fans have taken to Akol is good for the 6-foot-11 sophomore, as well as the whole program.

“It’s amazing. The fans love him already,” McDonald said. “It’s one of those things, and that can have a snowball effect on the team and the fan base. I’m really happy for him. He’s stayed working, and he’s a great kid. The speed of the game — it’s taken him some time to totally get into the system and understand the consistency we need from him.

“But he’s gone in and taken advantage of the opportunity the last couple weeks, and I’m really excited for him.”