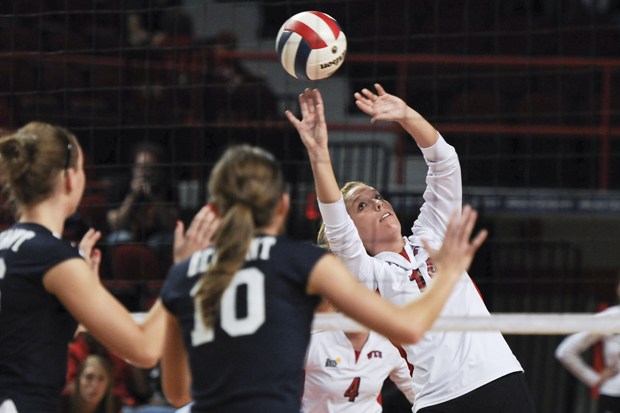 Freshman setter Melanie Stutsman sets the ball at the net during WKU's game against Belmont this past season. Stutsman was named a "Rising Star" of the freshman class by Collegiate Volleyball Update on Friday.

Melanie Stutsman has started off her volleyball career at WKU the right way.

The freshman from Floyds Knobs, Ind., was named a “Rising Star” of the 2010 freshman class by Collegiate Volleyball Update on Friday.

Just 19 freshmen around the country received the honor.

“To get this award as a freshman feels great,” Stutsman said. “I never would have expected to get it. I feel like I have learned a ton. I couldn’t believe there was still that much I didn’t know when I got to college.”

Stutsman started in all 121 sets for WKU in 2010 at the setter position, including playing in the NCAA tournament. She earned 1,289 assists for an average of 10.65, which ranked her third in the Sun Belt and 52nd in the nation in assists per set.

The freshman said the success of her first season as a Lady Topper serves as motivation to keep her working hard.

“I am looking forward to next season very much,” Stutsman said. “I’m very excited. Right now, I’m working on becoming consistent and doing the same thing every time.”