Tops bounce back from Thursday loss with convincing win over ULM 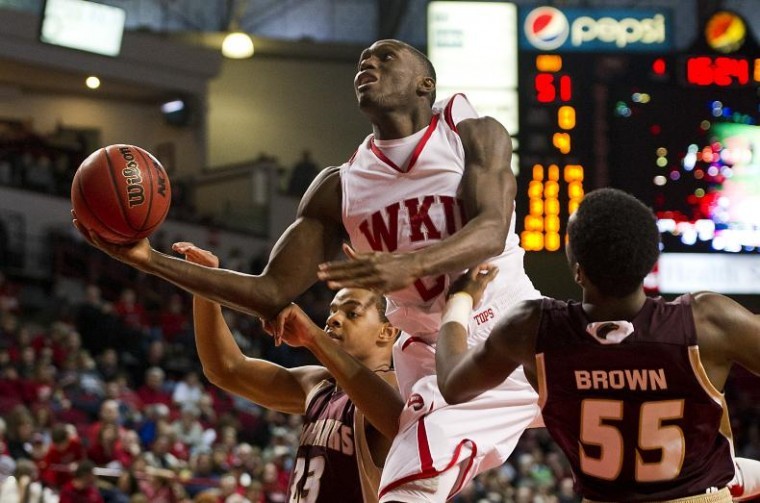 Senior forward Juan Pattillo takes on two ULM defenders as he takes the ball to the basket. WKU beat ULM, 81-61, to improve to 10-12.

Head Coach Ken McDonald said he’s still not sure what caused WKU to struggle against South Alabama on Thursday.

But whatever the issue was, the Toppers made sure it didn’t return Saturday.

WKU (10-12, 5-5 Sun Belt Conference) shot better than 50 percent from the floor and got its largest bench production in several games, cruising to an 81-61 win over Louisiana-Monroe in Diddle Arena.

“We weren’t like dogs in the South Alabama game, but we weren’t warriors,” McDonald said. “We weren’t playing the kind of game we needed to, especially with how we had been building, with our defense and team plays and hustle plays.

“But I am proud of the fact that the guys really bounced back with a lot more effort on the defensive side, and a lot more energy and enthusiasm.”

The Toppers out-rebounded ULM (6-19, 1-10 Sun Belt) by 10 and had several hustle plays that drew ovations from the Diddle crowd, which senior forward Sergio Kerusch said was part of a concerted effort to focus on the right things.

“We just had fun,” Kerusch said. “Seriously, we picked up our defensive intensity, and it looked like we had fun doing it.”

WKU led by double digits for much of the first half, but the Warhawks were able to pull within 33-28 at the 3:33 mark.

But the Toppers finished the first half on a 10-0 run, taking a 43-28 advantage into the locker room.

“We didn’t want to get to a place right now at the four-minute mark where they’re cutting it to under 10 and feeling like, ‘Hey, we can steal one,'” McDonald said. “We’ve seen that before. We saw that at Troy, where that confidence kept building up and suddenly, we’re not feeling good about ourselves.”

WKU didn’t let up after the break, continuing to maintain a comfortable lead that provided McDonald with a chance to utilize his bench.

“The bench is going to be a crucial part, especially come tournament time,” Kerusch said. “Anytime you have to play that many games in a row, you need the five guys that play 30-plus minutes to get a break. It’s just great to know that the bench can come in and produce like they did.”

Even freshman forwards Stephon Drane and Kene Anyigbo and sophomore center Teeng Akol got into the act, pitching in a combined 11 points in 22 minutes of play.

“I really wanted to play our bench a lot tonight because if you play well at home against a team that you can build a lead on, you have the chance to see these guys,” Ken McDonald said. “You saw Teeng out there for an extended time, and you saw that he could do some things. Stephon Drane, Kene Anyigbo — everyone has to contribute for us to be a good team from here on out.”

He also produced one of the defining plays of the game, diving for a missed free throw with the Toppers already up 18.

“Things like that are contagious,” Kahlil McDonald said. “When one guy does it, you hope that other players feed off of it. If one guy or two guys step up, the rest will follow.”

They have two more home games after that on Saturday and Monday, so Kerusch said the next two weeks are a great opportunity for WKU to make a statement.

“I think Western Kentucky is definitely one of the best teams in our league,” he said. “I feel that early on, we didn’t show that. Every game is a fight to prove that, yes, we are the best team in the league. We take that to heart, and we’re going to play like this every game.”