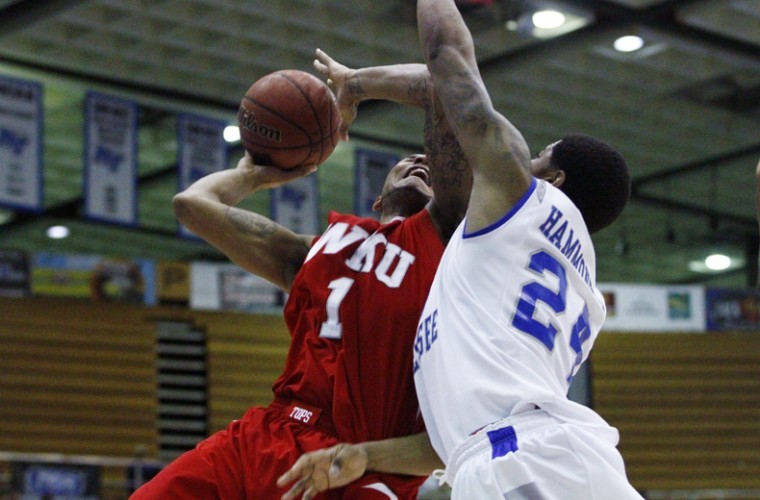 MTSU freshman Kerry Hammonds attempts to block WKU senior Sergio Kerusch during the Toppers' game at MTSU on Saturday. The Toppers lost 57-39, assuring them of a third-place finish in the Sun Belt East.

MURFREESBORO, Tenn. — “Momentum” has been the buzzword for WKU over the past several weeks.

But in Saturday’s regular season finale, that momentum suffered a serious blow.

“It would be one thing if we played really, really hard, and our body language was really strong, and we just lost the basketball game,” Head Coach Ken McDonald said. “We didn’t get that tonight.”

The loss was WKU’s fourth straight to MTSU (15-15, 10-6 Sun Belt) and its largest margin of defeat to the Blue Raiders since 1978. The Toppers’ 39 points were also the fewest they’ve scored against their rival since the 1935-36 season.

“This is one of the biggest (losses),” senior forward Steffphon Pettigrew. “To get beat by one of your rivals hurts a lot. This is my last regular season game, and to get beat by Middle Tennessee hurts a lot.”

The loss also gives WKU its first losing record in the regular season since the 1999-2000 season.

But the biggest blow came in the Sun Belt standings, as MTSU’s win guaranteed the Toppers a third-place finish in the East division.

That means WKU will start the Sun Belt tournament on the first day of action, meeting Louisiana-Monroe at 6:30 p.m. on March 5.

“If you’re made out of anything, you’re hopefully really down about how you played,” McDonald said. “Hopefully this feeling stays with you, because the next time you play like this, you’ll be done for the year.”

The Toppers hung tight for most of the first half until MTSU finished it on a 9-2 run, taking a 29-19 lead at halftime.

But MTSU fired off the game-deciding run — this one a 10-0 burst — and led the rest of the way. After a 3-pointer by junior guard Kahlil McDonald pulled WKU within 47-38 at the 5:08 mark, the Toppers never got another field goal.

“Once we tied it, I thought we were going to overcome and get the lead,” Kahlil McDonald said. “But they got stops and hit a 3 right after that, and then we folded.

WKU scored just one point the rest of the way — a free throw by Kahlil McDonald with 25 seconds left. The Toppers made just one of their last nine free throws in the game.

“We tied it in the second half, and once they came back and made a little run, we struggled,” Ken McDonald said. “We struggled to execute, we didn’t make shots, we didn’t make free throws, and we didn’t defend. It really snowballed in a hurry after cutting their lead down and tying it.”

The Toppers shot just 30.4 percent from the field, recording 14 field goals and four assists with 16 turnovers.

WKU was out-rebounded, 40-36, and their senior trio of Pettigrew, Sergio Kerusch and Juan Pattillo went 10-of-30 from the field.

“We showed some life,” Pettigrew said. “We were right there, and then after that, we just lost the energy. After that, they got bucket after bucket and started building their momentum, and they just hit us in the mouth. We collapsed after that.”

MTSU shot 40 percent from the field and was paced by J.T. Sulton’s 18 points.

The Blue Raiders’ entire senior class has only been with MTSU for two years because of junior college transfers and walk-ons, therefore giving that group a 4-0 record against the Toppers.

“We’ve just played extremely well against Western, and now our team’s got some confidence against Western,” MTSU coach Kermit Davis said. “It was the other way three or four years ago.”

The Toppers have a week off before they enter a one-and-done situation at the Sun Belt tournament in Hot Springs, Ark.

Ken McDonald said he would prefer to finish the regular season on a higher note, but that’s just something WKU will have to overcome.

“Losing to these guys — it makes me sick,” he said. “But that’s life right now, and we have to change it. Nobody’s going to feel sorry for you. You have to go out and do it.”